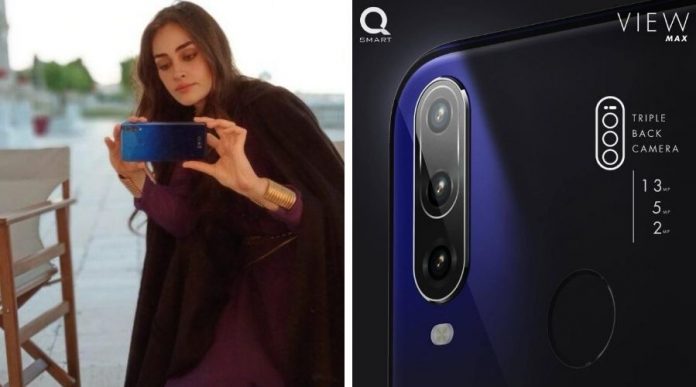 Winning hearts of thousands in Pakistan, Esra Bilgic who plays the powerful and elegant “Halime Sultan” on “Ghazi:Ertugrul” has been signed as the new brand ambassador for QMobile’s latest phone, causing much controversy in the country.

The mobile which will be featured in the campaign starring Esra Bilgic is the latest “QMobile View Max”, which is an entry level phone that is being released after a long time.
We can see the phone in some of the BTS shots and teasers released by QMobile featuring the beautiful Esra Bilgic.

The phone looks sleek with a reflective back, with 6.1″ U Notch super slim display, Dual back camera, Long-lasting 4000 mAh battery, 2GB RAM and 32GB ROM with fingerprint and face scanner.

The RAM is quite impressive that will improve the speed of the device when chipset and RAM work together.

QMobile released the first look of the phone:

The latest phone is to be released on next week as shared by the Mobile Mogul themselves:
“Ready for the #VIEW? 5 days to go. Stay Tuned!”

The phone is essentially a camera phone and for a detailed review, view the video below: