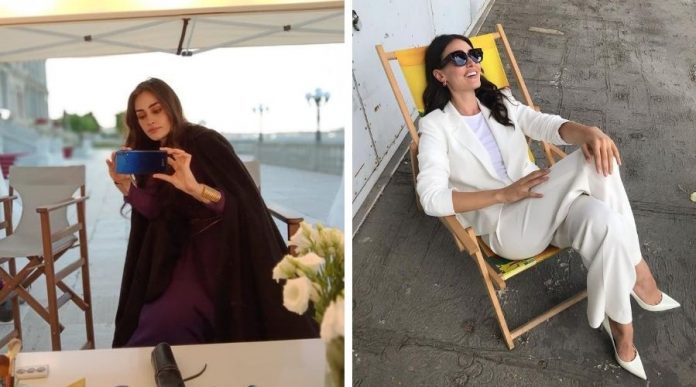 Mesmerizing ever since her first appearance as Halime Sultan in the series “Ertugrul”, Esra has become one of the most popular and loved actress by the Pakistani audience. Recently Esra Bilgic got signed by the Pakistani Mobile giants “QMobile” for their latest product release campaign, becoming their new Brand Ambassador”.

Recently the Mobile Mogul released some of the BTS clips of the actress while shooting for the campaign and the Pakistani audiences are living for it.

The first clip is very “Ghazi: Ertugrul” inspired where the actress in a Greek goddess styled dress with the reins of a beautiful horse in her hands and she is walking in slow motion towards the camera, looking absolutely ethereal.

In the second clip, like her character “Halime Sultan”, Esra is sporting a giant crown on her head while makeup artists and spot boys hover around her. The scene also features a sword fighter, which makes us believe that the campaign is loaded with medieval-esque story lines.

The third BTS, is of simply Esra being flawlessly Esra and taking a picture while sporting a kaftan and a giant gold bangle. The makeup looks throughout the BTS shots are true to Esra’s style that is minimal, natural yet appealing.

QMobile had previously hired many celebrities like Fawad Khan, Mahira Khan, Aditya Roy Kapoor and many more for their mega campiagns

Dubbing itself as the ‘launch of the season’, audiences are sure to fall in love with the latest campaign that features their favourite sovereign.