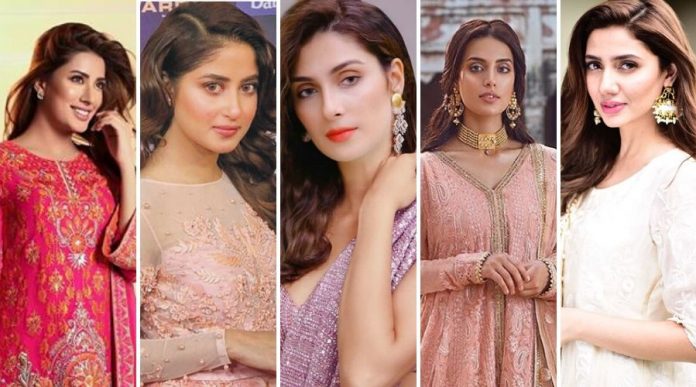 2019 has produced some of the greatest content that the Pakistani Television and Cinema has ever seen in a long time with TRP breaking dramas, blockbuster movies and invigorating performances. And the leading ladies of the industry have given the audiences a range of characters with stellar performances and screen presence.

Here is the list we have put down for the Top Paid actresses in 2020:

Always extremely blunt and confident about her choices, Saba Qamar has become the beacon of what a modern Pakistani woman is. From the choices of her drama characters to the content available on her YouTube channel, Saba Qamar is ready for any head-on challenge. Delivering superb performance in 2019 serial “Cheekh”, Saba Qamar continues to rule the industry, charging Rs.800,000 per episode.

Mahira Khan made her mark on the Pakistani audiences with her graceful yet strong performance in hit serials like “Humsafar”, “Sheher-e-Zaat” and many more. Mahira has become a league of her own, the most premium brand of Pakistan and is one of the highest paid actress with charging Rs.850,000 per episode. Mahira Khan at the end of the year became first UNHCR goodwill ambassador from Pakistan for her contribution towards the displaced refugees in the country.

If any actor has sky rocketed to fame in 2019, it is Iqra Aziz, with her highly commercially successful Suno Chanda 2 and critically acclaimed Ranjha Ranjha Kardi. Aziz has given its audiences the range, proving that she can easily play a comic role and also a gut wrenching emotionally dramatic role. Aziz is in demand and becoming one of the top actresses in Pakistan. Aziz also won Lux Style Award in 2018 for Best Actress.

Hailing as a top model in the country, Amina Sheikh has become a veteran actor who has starred in dramas like “Maat”, “Jackson Heights”, “Daam” and much more. Her performance has been critically as well as commercially acclaimed. Being one of the top actresses now in the country, Mehwish charges Rs. 400,000 per episode. Married to Mohib Mirza, Shiekh filed for divorce in 2019.

With almost serving 10 years in the industry, Ayeza Khan did something in 2019 that she did not before in her career by opting for the role of main villain in the record breaking Drama “Mere Paas Tum Ho”. The serial smashed the TRP’s in the history of Pakistani television and one of the reason was Ayeza Khans “Mehwish”. Being one of the top actresses now in the country, Mehwish charges Rs.650,000 per episode.

With smash hits one after the other, Sajal Ali has the all best Dramas in the bag for 2019. With stories that have rarely been seen on Pakistani Screens before, Sajal has diversified the choice of her roles. Sajal has also worked alongside Indian Legend Sridevi in the critically acclaimed “Mom”. With mega hits like Alif and Ye Dil Mera, Sajal is now one of the highest paid actress with charging Rs.650,000 per episode.

By far the most strong and morally lifted female characters have been portrayed by Yumna Zaidi in 2019. With heart wrenching stories of dramas like Inkaar, Dil Kya Karay and Ishq Zahay Naseeb, Zaidi rules the screen with her strong expressions and acting skills. She is rapidly increasing in demand and charging what a leading actress should. She won Hum TV Award for “Darr Si Jaati Hai Sila” in 2018.

Being honoured with Tamgha-e-Imtiaz, the highest ranking National honour for service in the Entertainment Industry, Mehwish Hayat is a powerhouse who also won many more accolades over the years. Mehwish Hayat, is the rare celebrity in Pakistan who seems eligible to be called a “Triple Threat”, as the star can act, dance and sing marvelously. Mostly appearing in movies now, Mehwish Hayat now charges Rs.800,000 per episode.

Sanam Baloch ruled the drama industry for some time by giving hits like “Bano”, “Durr-e-Shehwaar”, “Kankar” and many more. She was hailed as the “Drama Queen” in the early 2010’s and moved on to rule the morning show industry. Her are the dramas that have become cult classics of the Pakistani drama industry. Sanam is charging Rs. 680,000 per episode making her one of the highest paid actress.