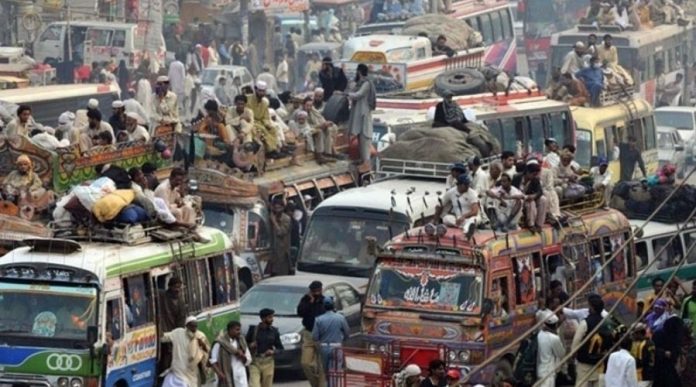 Karachi, the biggest city of Pakistan, is also one of the most growing city and the third largest populated city in the world. The US news agency “Bloomberg,” on Tuesday declared Karachis’s Transport System as the worst in the world.

About 42% of the city’s commuters have to you decades-oldattrited and overcrowded buses and sometimes have to use the roof as the second deck. Most of the roads are incomplete and have potholes, many signals don’t work and drivers are seen running the red lights in regular intervals which results in accidents.

Bloomberg specifically named “M.A. Jinnah Road,” which is incomplete for several years and it is one of the most important roads which connects the central city to its ports. Two of the three lanes are eaten up by an elevated street, which part of a project, but it’s empty because it was part of an incomplete project to create express lanes for public buses that were supposed to finish three years ago. It’s one of many towering structures scattered throughout the Pakistani city that were part of the latest plans to bring modern transportation to Karachi.

A consultant from Development Alternatives Incorporated, an international company that advises on development projects, Arsalan Ali Faheem called Karachi a “Political Orphan,” despite its importance and said, “The federal government is limited in what it can do, and the city government controls less than a quarter of the city. It means that Karachi’s problems belong simultaneously to everyone and no one.”

The brokenness of the infrastructure came into the center in August when record rainfall overflowed numerous parts of the city for over seven days and wreak havoc in the metropolitan hub of Pakistan. Around 64 people while 10,000 had to be rescued. The flooding left numerous people trapped and without power that was broken down. A couple of days after the fact, cell phone service and cash machines quit working as well.

In its repercussions, Pakistan Prime Minister Imran Khan visited the city and announced a development package valued at 1.1 trillion rupees jointly with the provincial government including the bus project and a circular railway system. The provincial government’s transport department has admitted it can’t do large projects on its own.

Khan’s federal government announced 162 Billion rupees for mega projects in the city last year including transport, but city officials reported that no funds were ever released earlier this year. The latest attempts follow several others to bring Karachi’s transportation system into the modern era. Multiple bus projects have been announced over the years but either they never started or were unable to sustain for more than a few years.

Karachi was once well-connected by a circular railway but corruption and mismanagement in the transportation sector brought the city to a grinding halt in the 1990s, according to Weinstein. Many of the railway tracks have become illegal slums, where people have settled from smaller towns.

According to research fellow at the Washington D.C.-based Quincy Institute for Responsible Statecraft, Adam Weinstein, “Karachi has yet to find a humane way to address land encroachment that stymies development and relocate people without incurring immense political blowback.”