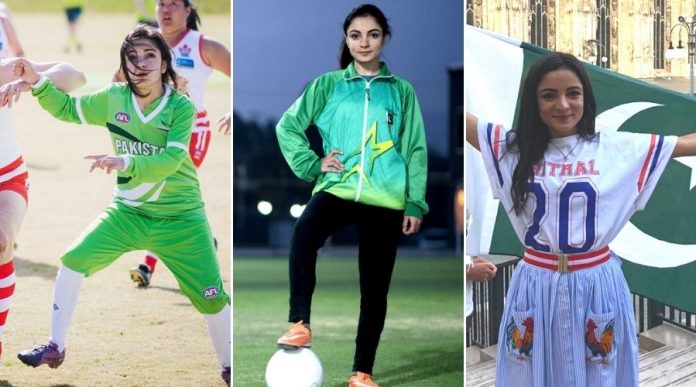 Making waves in Pakistan and around the world, Pakistani footballer Karishma Ali is among five Pakistanis who have made it to the “Forbes 30 Under 30 Asia 2019” list.

Playing football for Pakistan on an international level, Karishma is the first girl from Chitral to have played football. Opened last year in Chitral, Karishma is also the founder of the Chitral Women’s Sports Club which is training 60 girls in football and other sports, encouraging local sports activities.

“I want to see at least 10-20 more girls like myself who come back here [Chitral] after they’ve achieved their dream and work for the other girls that I was not able to reach out to,” said Ms Ali

“I just want to see more women in leadership positions and then sit back and enjoy. This is what I want,” she added.

She also stated: “Challenges are here for the girls, especially to have a different dream or to do something outside of what society expects you to do,”.

She has represented Pakistan at the Jubilee Games in Dubai, and her team was the first women’s team from Pakistan to participate in the AFL International Cup.

Karishma during the Covid-19 spread had played a vital role in her community by delivering much-needed supplies to the local hospital and underprivileged villagers. Items bought with money she raised, mainly through social media.

“She says that, as of August, they had supplied one month’s worth of rations to 300 families, and donated 155 N95 masks, 53 goggles, 250 PPE suits, 650 surgical masks, 400 pairs of surgical gloves and 76 face shields to the DHQ Hospital Chitral,” the report underscored.

Karishma has made a name for herself in international and local arenas and many great things will be seen from such a bright individual.