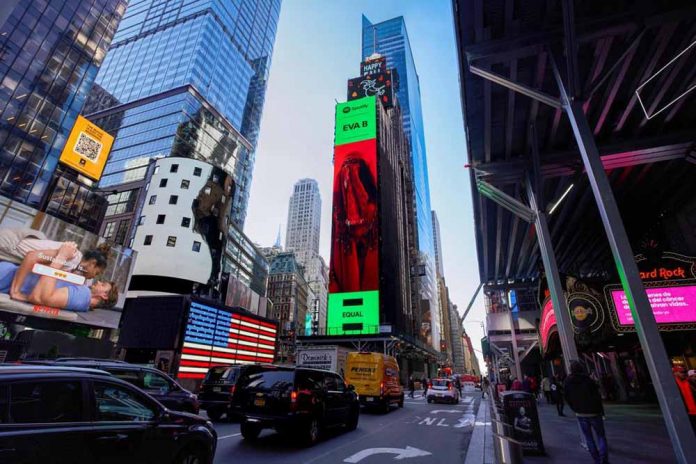 Eva B, the first veiled woman rapper in Pakistan, becomes the latest face to feature on a digital billboard at Times Square NYC, as EQUAL Pakistan’s Ambassador for the month of October. Her track Mukhtasir Baatein will be featured on Spotify as part of her accreditation on EQUAL’s local and global playlists.

Hailing from Balochistan, Eva Baloch, who goes by her pseudonym, Eva B, has been taking the industry by storm dropping hit after hit, with her monthly listeners nearing 400,000 on Spotify and her song  ‘Kana Yari’, clocking more than 10 million streams on the audio streaming platform.

Taking inspiration from the legendary rappers Eminem and Queen Latifah, Eva B started her career in 2014. She started writing lyrics and posting on social media where she eventually garnered attention and built her following. She has come a long way since then, collaborating with leading names like Ali Gul Pir, Muhammad and Anas Baloch. Her song ‘Rozi’ was even featured in the closing of the first episode of Ms. Marvel TV series.

“I feel super excited and I’m happy to be a part of Spotify’s EQUAL program. I feel very proud. Initiatives like these aren’t just important but they are really required – they are the need of the hour,” said Eva B sharing her excitement on being featured as EQUAL Pakistan’s Ambassador this month.

Known as the ‘veiled woman rapper’ and a first one at that, Eva finds pride in her veil being an integral part of her identity as an artist. Coming from a conservative background and being raised in Lyari, a neighborhood of Karachi that is gaining reputation for the rise of hip hop, producing iron chin boxers, and top footballers lately, Eva has set a great example for the young generation, especially women, that nothing can stop you if you have the resilience, hard work and persistence to achieve what you want.