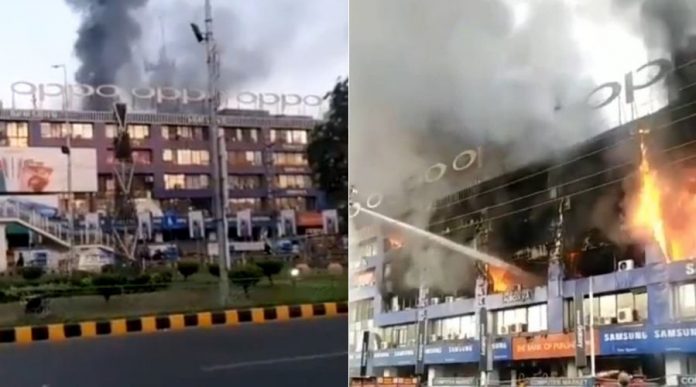 Early Sunday morning, a big fire inside Hafiz Center located at the city’s Gulberg main boulevard area due to an electrical short circuit, spreading to the fourth floor of the building.

Hafeez Centre plaza, Gulberg Lahore is one of the biggest technology centers in the South Asia where laptops, mobile phones and other electronic items are sold.

The fire brigade was called soon after the fire broke out around 6:00 am in the morning.
Mian Khalid Mahmood and Punjab Health Minister Dr Yasmin Rashid arrive on the scene on directions from the chief minister. CM Buzdar issues instructions for officials to hasten rescue operation.

The fire has consumed 30-40 shops in total and has spread to the shopping centre’s backside as well, the rescue official said.

“The intensity of the fire has increased due to [the burning of] laptops and mobile phones,” he said.

Twelve fire brigades and 60 rescue officials are carrying our relief activities in the area. Reports from the ground state that eight fire brigades have run out of water.

No loss of life reported but laptops, mobile phones worth millions destroyed.

The Gulberg Main Boulevard Road has been closed for traffic due to relief activities being carried out in the area.

Authorities have called for more fire brigades at the spot due to the intensity of the fire.