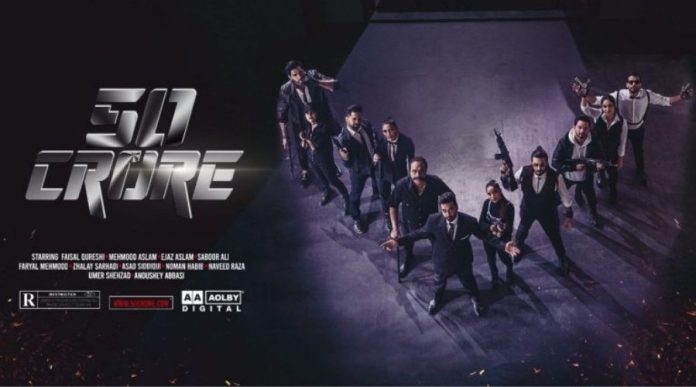 With the “Revival Of Pakistani Cinema” movement, many creators have delivered projects that have garnered much acclaim across the world.

Recently, another project titled as “50 Crore” created a major hype in the netizens even before its first teaser poster released where the audiences said that the movie seems to be a rip-off of the famous franchises Ocean’s Eleven and the popular Spanish show “La Casa De Papel” also widely known as Money Heist.

The exciting new look of the movie shows the stars of the movie taking their mugshots with names of the places (city names) they are from.

The movie looked like the classic plot of pulling “the perfect crime” by planning some mega heist or something similar.

While speaking to the director about the inspiration taken from world famous TV series Money Heist, he said, “We understand the similarity with the internationally renowned series but for us it is much bigger than that.

We are not just inspired by the story lines of the western movies like Oceans Eleven and other similar hits but are also extremely thrilled to bring a similar concept to the Pakistani film industry”.

However, It was not exactly we thought it was. Then what was this all about?

It seems like the the real professor behind this lookalike project has some other major plans for the heist.

Reportedly, Pakistan’s biggest online shopping marketplace Daraz is running this ad campaign and it will soon reveal the mystery regarding this campaign on World’s biggest online Gyara Gyara sale (11.11) this year, which will start at midnight on November 11.