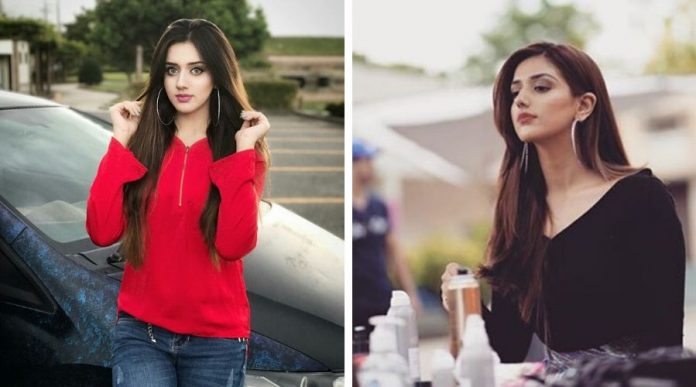 This leak of images comes after the much awaited appearance of Jannat Mirza in the newly released song by Bilal Saeed’s One Two Records that is sung by Sarmad Qadeer titled “Shayar”.

Jannat starred in the video after previously signing a movie with director extraordinaire Syed Noor.

The song garnered massive popularity, gaining over 50k views within the first hour of its release. It is still trending in the country and now stands at over 3 million views.

Recently due to its massive popularity, TikTok has been a constant target of cyber-crimes as recently famed TikToker Minahil Malik also became a target and her personal images were also leaked, making a big controversy.

Jannat Mir with 7.4 million followers and more than 129.8 million likes on her official account is Pakistan’s biggest TikTok star and this is not the first time that she has faced cyber crimes.

Jannat revealed that all the leaks are fake and have been photoshopped to tarnish her reputation and character.

In an Instagram story, Jannat expressed her anger and disappointment to her haters

In another instagram story, she mentioned how this was done to her before in 2019 as well.

She also warned to take action against such people.

Such acts of hate and crime not only is a great source of depression and anxiety for the targeted party but also a way to tarnish a person’s character or ruin their career completely as social media tends to jump the gun without proper research and the toxic “cancel” culture blames the people who have been preyed upon rather than the real culprits.

If someone has become a target of cyber-crimes then reporting it to the government authorities is of utmost importance.

Simply call 9911 which is the official complaint center for reporting such crimes by FIA or you can visit office of FIA to register the complaint.