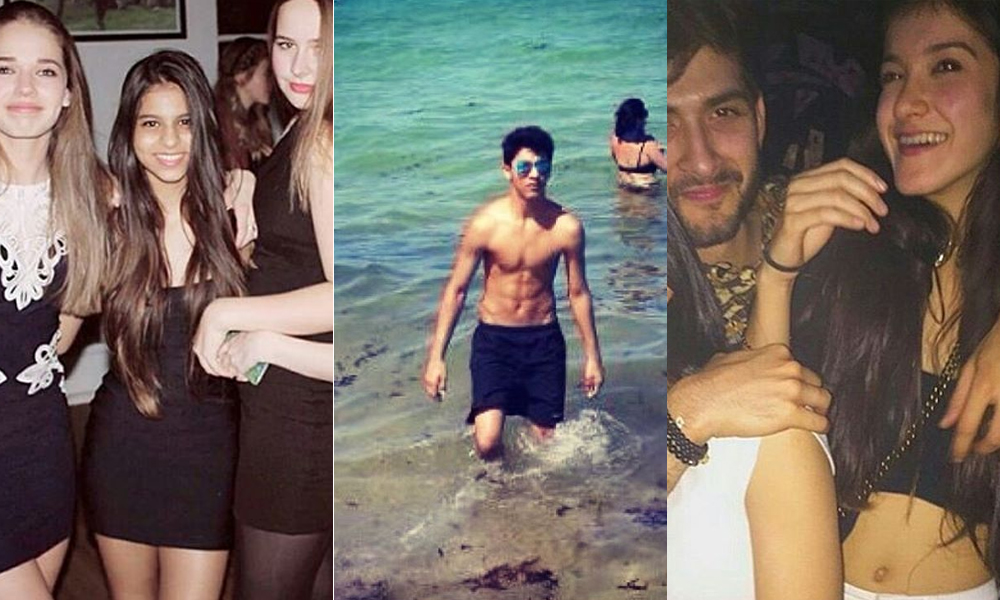 The Bollywood nepotism debate was a pretty hot subject a few days back. And while some agreed with it, the others simply took offence.  Bollywood was not always a victim of some dominant families ruling the industry. Bollywood superstars like Shahrukh khan, Jackie Shroff, Sridevi and much and others rose from the bottom to the top.

Their kids, however, are another breed altogether. They have the limelight and luxuries fit for royalties. The star kids of the Bollywood actors are already living a life of a celebrity on social media where a million of people are following them to see their glamorous life.

Born with a silver spoon,  they are embracing the world of glamour already and are waiting to be launched.

HERE ARE THE 10 RICH KIDS OF BOLLYWOOD ACTORS:

The son of Bollywood’s superstar Shahrukh Khan is currently studying in London. Aryan’s Instagram’s is filled with his party pictures and vacations in exotic places.

Shahrukh Khan’s daughter “Suhana Khan” also doesn’t shy away from showing her sense of style and glamour. Shahrukh Khan has been openly possessive about his daughter. She is her daddy’s princess!

Sridevi and Boney Kapoor’s daughters Jhanvi Kapoor is all grown up and is ready to make her debut in Bollywood. Similarly, the rumors of Jhanvi, making her debut film in the southern film industry have gathered quite a steam.

Nawab of Pataudi Saif Ali Khan’s son “Ibrahim Ali Khan” is currently studying in the UK. Ibrahim has a great resemblance to her father in his early days. The actor’s son is every bit a nawab like his father having a knack for rich sports.

Daughter of Amrita Singh and Saif Ali khan is continuously making rounds in paparazzi. First to be launched by Karan Johar to making her debut in the student of the year sequel. And now apparently her mother has forbidden her from wearing a bikini on screen.

Sridevi’s youngest daughter Khushi Kapoor who is just 15 is rocking her Instagram account with her great looks and extravagant lifestyle.

After her brother Tiger Shroff’s success its Krishna’s turn to shine. She has all the qualities to be successful in Bollywood. She is bold, beautiful and hot!

Daughter of acclaimed filmmaker, Anurag Kashyap also has a keen interest in making films. Recently she made a documentary which was well received.

Son of Bollywood’s macho man Suniel Shetty “Aahan Shetty” is also gearing up for his Bollywood debut. According to the reports, he is being trained by Salman Khan himself as  he will launch him one of the projects.

Actor Akshay Kumar and Twinkle Khanna’s son Aarav is all of but he already has a huge fan following. Just like his father, Aarav, too, is learning martial arts and is very active in sports including martial arts.