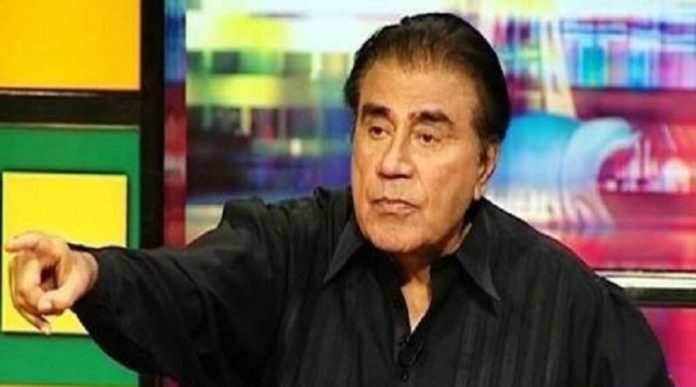 One of the biggest legend of Pakistani TV industry, Tariq Aziz, has passed away. His death has been confirmed by his family, who said that he was admitted in a private hospital last night after feeling critically ill in Lahore.

Tariq Aziz was a Pakistani film actor, television show host and politician who is known for his work on the PTV’s Quiz Show Neelam Ghar, first aired in 1974. His record breaking family quiz show was first launched in 1974.

His show Neelam Ghar is one the longest running shows in the history of Pakistani television.

Before becoming the most famous host on television, Tariq Aziz, along with the film actor Waheed Murad and film actress Zeba, starred in the film “Insaniyat (1967)”, a Pakistani film. Aziz also starred in another Pakistani film “Haar Gaya Insaan”.

In 2018, while giving an interview to a newspaper, he was have reported to have said, “He (Tariq Aziz) shared that having children or no children is the will of Allah and since he has no kids of his own, he would like to give all his earnings for the welfare of his country. Aziz has won the hearts of many by announcing his will and he surely is a role model for all of us.”

Tariq Aziz has become a cult figure in Pakistani culture and fans are mourning the death of the legend as #TariqAziz and #NeelamGhar have started trending on twitter.

His yesterday's words. May his soul rest in peace ! 😢#TariqAziz pic.twitter.com/V8M7v8BH9l

Legendary host, an intellectual powerhouse and a brand in himself.
His famous “Dekhti aankhon sunty kaanon ko Tariq Aziz ka salam” and “Ye apka hua”still echoes in my ears.

May the Almighty bless his soul with higher ranks and give strength to the loss bearers.
RIP #TariqAziz !

I must say we all lost some part of our childhood today.#TariqAziz pic.twitter.com/tGrDbQe7a4

He was one of the first TV anchors to gain commercial success through Neelam Ghar/Tariq Aziz Show. He interviewed many notable intellectuals, sportspersons and celebrities like late Nazia Hassan and many more on his shows.