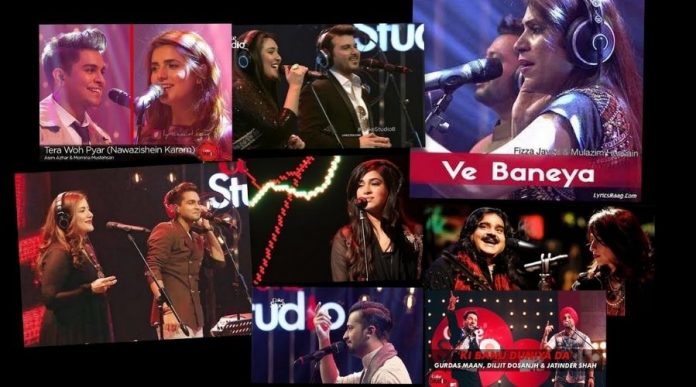 Coke Studio is one show that delivers some of the most contemporary, traditional, uber cool and desi songs in Pakistan and people have been loving its every season as the years go by.

Promoting the different cultures of Pakistan and celebrating them by combining traditional classical, folk, Sufi, qawwali, ghazal and many more, Coke Studio is the most awaited program every year.

Whether you are young or old, Coke Studio has got something for everyone and here is a list of 10 most iconic songs done by Coke Studio that one should listen to in this life.

One of the songs that literally made Coke Studio on everyone’s radar in 2010s was the Arif Lohar and Meesha Shafi Collaborated “Jugni Ji”, a new take on Arif Lohars brilliant classic.

Noori came together to perform a sufi number with leading Sufi musician from Pakistan, Saeein Zahoor and that is the perfect formula to make a hit as the blend of traditional with contemporary made strides and became yet another classic.

Another one of Reshma’s iconic song that was done to perfection in Coke Studio was Daanah Pah Daanah. The song was performed by the excellent duel Komal Rizvi and Akhtar Chanal Zahri who’s playful back and forth during the song gave it an extra oomph factor.

The latest rendition done by Atif Aslam of the iconic Tajdar-E-Haram by Sabri Brothers invoked in every Muslim’s heart the love and longing they felt for their Prophet (pbuh) as Aslam gave it all.

Released just days before Independence Day, this “Naseem Begum” masterpiece was treated right when all the ace performers of the industry came together to perform this Naghma as tribute to the heroes of Pakistan.

A celebrated Punjabi folk song, a new energy was instilled in it when Qurat-ul-ain Baloch and the extremely energetic and expressive Umair Jaiswal teamed up to perform this song. One’s senses are definitely lifted once this song starts to play.

An ode to the love one seeks, “Nindiya Re” by Kaavish is a melody that sinks deep into the soul with the brilliant lyrics and supreme voice. It is an oldie Coke Studio classic but a keeper.

Farida Khanum being the excellence of the music industry that she is, came back once more to perform her classic geet by Fayyaz Hashmi once more with the recomposition done by Strings.

Bilal Khan delivered this contemporary romantic number back in 2010s and made it the anthem of the young generation as it continues to be one of the most amazing song done by the artist.

Two legends came together to perform a qawwali, why would not have been a hit. With more than 255 million views, it is evident that the song made strides.