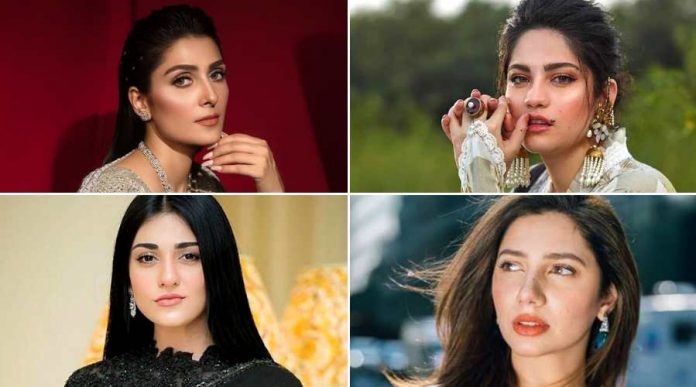 Over the past few years, the Pakistani drama and film Industry has been grabbing attention from all around the world for its amazing production, storyline, direction, and talented actors. Many Pakistani actors and actress has made their name in the local and international film industry as well. They are all best known for their gorgeous looks and phenomenal acting skills. In this article, we will talk about the Top 10 Pakistani actresses, who are not just beautiful but extremely talented and successful as well.

On our number one spot, we have the gorgeous Mehwish Hayat. The 35-year-old actress is best known for her dramas like Mirat-ul-Uroos, Ru Baru, Phir Chand Pe Dastak, and Dil Lagi. The actress made her film debut with the comedy Jawani Phir Nahi Ani in 2015 and after that, she also appeared in many other super hit movies like Jawani Phir Nahi Ani 2, Punjab Nahi Jaungi, Load Wedding, Actor in Law, London Nahi Jaunga and many more. After Proving her acting skills in the Pakistani industry, Mehwish Hayat was awarded ‘Tamgha–e–Imtiaz’ for her contribution to art and cinema in 2019. Mehwish also made her Hollywood debut with an impactful appearance in the Disney+ series ”Ms.Marvel” in 2022. In the series, Mehwish Hayat portrayed Kamala Khan’s great-grandmother, Aisha, and stunned everyone with her breathtaking performance.

The next most popular actress among Pakistanis is the one and only Mahira Khan. Mahira first made headlines with her super hit drama serial ”Humsafar,” which became one of the best dramas ever made in Pakistani history. She is also known for her appearance in Drama serial Sadqay Tumhare, Shehr-e-Zaat, and Neeyat. The actress made her film debut with super hit Bol co-starring Atif Aslam in 2011. She then also made her Bollywood debut with non-other than ”Shahrukh Khan” itself in the movie ”Raees” in 2017. In 2022, Mahira appeared in Pakistan’s biggest Punjabi movie ever made, ”The Legend of Maula Jatt” which has already crossed over Rs. 1 Billion at the box office and it’s still growing. Mahira has also received major recognition for her biographical-drama film ”Aik Hai Nigar” based on the three-star general of the Pakistan Army, Nigar Johar, which centers on her life and career.

Almost everyone knows about Ayeza Khan and her stunning looks and acting skills, but most of you probably don’t know that her real name is ‘Kinza Khan.’ Ayeza Khan is a very versatile actress and model. Ayeza started her career in 2009 and got married in 2014 to Danish Taimoor, who is also a very famous Pakistani actor and model. Ayeza Khan is best known for her super hit drama serial ”Mere Pass Tum Ho” which received many awards and is considered as one of the best Pakistani dramas ever. The drama is written by Kahlil ur Rehman Qamar and directed by Nadeem Baig and the cast also includes big names like Humayun Saeed, Hira Mani, and Adnan Siddiqui. The actress appeared in many other hit drama serials such as Tum Kon Piya, Mohabbat Tumse Nafrat Hai, Mere Mehrbaan and Pyaree Afzal.

The young Pakistani actress, singer, and model has made quite a big name for herself in just a few years in the industry. The actress started her career in 2016 with a supporting role Alina in Choti Si Zindagi and since then she has stolen the hearts of many with her cute looks and versatile acting skills. Alizeh is best known for her role in the super hit drama Ehd-e-Wafa by Inter-Services Public Relations (ISPR) which aired in 2019.

Iqra Aziz is another one of the most talented young Pakistan actresses who made her career debut in 2014. She is best known for her appearance in the third season of the Pakistani spiritual-romance series ”Khuda Aur Mohabbat.” The drama not just gained immense popularity and love in Pakistan but in India and other countries of the world as well.  She also made her name in super hit serials like Choti Si Zindagi (2016), Qurban (2018), Suno Chanda (2018), Tabeer (2018), Ranjha Ranjha Kardi (2018) and Jhooti (2020).

Sajal Aly is no doubt one of the most popular and successful actresses in Pakistan, she made her acting debut in comedy-drama Nadaaniyaan in 2009 and later on appeared in a breakout role in the family drama Mehmoodabad Ki Malkin in 2011. Sajal Aly is best known for her roles as Dr. Asfandya in Yaqeen Ka Safar and Noor-ul-Ain Zaman in Yeh Dil Mera. Sajal Aly also made her Bollywood debut with the movie ‘Mom’ with veteran Indian actress Sridevi herself.

Sarah Khan made her acting debut with a supporting role in 2012 Hum TV’s serial ‘Badi Aapa.’ The actress is best known for her roles in Sabaat (2020), Raqs-e-Bismil (2020), and Hum Tum (2022). The actress made headlines by surprising her fans when she announced her wedding to the popular Pakistani singer Falak Shabbir in 2020.

Hira Salman, widely known as Hira Mani, is a Pakistani television actress, singer, host, and former video jockey. Hira starred in many super-hit Pakistani drama serials but she is best known for her role in ‘Do Bol’ and ‘Mere Pass Tum Ho.’ The actress started her career in 2010 and married her fellow actor Mani aka Salman Saqib Sheikh. The couple is also very famous for having immense love and affection for each other. Hira also appeared in many other famous serials like ‘Dil Mom Ka Diya,’ ‘Aangan,’ and ‘Yakeen Ka Safar.’

Who doesn’t know Neelam Muneer? The actress received huge love and appreciation from her fans for her amazing performance in the super hit drama serial ‘Dil Mom Ka Diya.’ She also received an award for Best TV Actress in the 18th Lux Style Awards. Moreover, Neelam was also rewarded with IPPA best actress public choice award in the year 2017. Neelam also appeared in many other super-hit drama serials like Kahin Deep Jalay, Tere Bina, and Mere Mehrbaan. She also appeared in Pakistani films like Wrong No, Chakkar and Chuppan Chuppai.

Saba Qamar Zaman, known as Saba Qamar is another one of the most popular and highest-paid Pakistani actresses. Saba rose to fame after her TV Show ‘Hum Sab Umeed Se Hain.’ She has received many Lux Style Awards and Hum Style Awards for her unique acting skills. Saba also made her Bollywood debut with the movie ‘Hindi Medium’ co-starring late actor Irfan Khan. On many occasions, Saba revealed that it was the best acting experience she had with Irfan. She also appeared in many other hit drama serials and films including Cheekh, Digest Writer, Baaghi, Fraud, Besharaam, Manto and Ghabrana Nahi Hai.

Yumna Zaidi is best known for her diverse characters in social to romantic drama serials. Yumna Zaidi made her acting debut in 2012, however, she has risen to fame in the past few years with her super hit dramas in which she has performed very different and unique roles. The actress is receiving immense love for her ongoing drama series ‘Tere Bin’ on Geo TV for her amazing acting and expressions. Yumna also made people turn heads with her super hit serials including Bakhtawaar, Raaz-e-Ulfaat, Inkaar and Dar Si Jati Hai Sila.