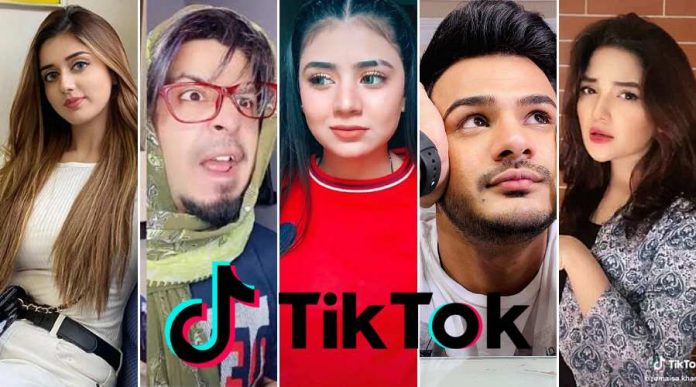 TikTok has gained over 100 Million users since its launch in Pakistan in 2017 and has become one of the most popular apps in the country. Almost every Pakistani now has the app installed on their mobile, even if they don’t make TikTok videos, they still spend hours watching them. While making short videos on the app may have made a big name for themselves not just in Pakistan but internationally as well. They have gained millions of followers and likes on TikTok and many brands have also approached these TikTokers, now they are also being offered roles in drama serials and even in movies. In this article, we will share a list of the Top 10 TikTokers in Pakistan.

Jannat Mirza is definitely in our top spot. The young and beautiful TikToker has over 21 Million Followers and a whooping 602 Million likes on her TikTok account. She also got a PISA award in 2021 for her amazing video content on social media. According to the source, the 22-year-old Jannat charges over Rs. 100,000 for just one modeling photoshoot and gets Rs. 700,000 just to shoot a sponsored video. Jannat also has over 4 Million followers on her Instagram account.

Alishba Anjum, whom her fans affectionately call ‘Lishay’ is the sister of popular TikTok star Jannat Mirza. Just like her star sister, Alishba is also very famous among the TikTok community for her cute looks and amazing acting skills. Alishba has over 15.6 Million Followers and 463.7 Million Likes on her TikTok account. She also has over 2 Million Followers on Instagram. Alishba’s estimated net worth is about $1 million. She also earns around Rs. 300,000-350,000 for making a sponsored video.

Kanwal Aftab gained popularity with her super cute TikTok videos and while working as a broadcast journalist for one of the top Pakistani news channels Urdu Point. After her gaining immense popularity she then later married beau TikToker Ch Zulqurnain in 2022. Recently both the Tiktok stars were also blessed with a baby boy. Kanwal has over 17 Million followers and 615 Million likes on TikTok. She also has 2.6 Million followers on her Instagram account. Kanwal also has a YouTube channel, where she regularly uploads her vlogs with her husband and family.

Chaudhary Zulqarnain Sikandar also known as Ch Zulqurnain is also one of the most popular. He’s also the husband of famed TikToker Kanwal Aftab. Zulqarnain is well known for making funny short videos on TikTok and making everyone laugh their hearts out. He has over 15.6 Million followers and over 736 Million Likes on TikTok. Zulqarnain also shares regular vlogs on his youtube channel with his wife Kanwal and his family. Zulqurnain also made his acting debut with drama serial ”Masters’.’

Romaisa Khan is best known for making hilarious funny videos on TikTok. Her fans also call her the ‘Expression Queen’ of TikTok. Romaisa also made her debut in the Pakistani drama industry with a series called ”Masters.” Now she has also appeared in a new drama serial ”Noor” on Express TV.  Romaisa has over 7 Million followers and 153 Million likes on TikTok. She also gained over 2.5 Million followers on Instagram.

Nadeem Mubarak, widely known as Nadeem Nani Wala became popular for making adorable short videos with her Nani (Grandmother) and giving away ‘free’ iPhones on TikTok. Nadeem regularly shared videos on TikTok with her nani, adorably teasing her. Everyone adored Nani wala for loving her grandmother like this on the internet. Nadeem also got into the spotlight after picking up fights with several YouTubers online like Ducky Bhai. However, after some time they became friends and started making videos and vlogs together.  Nadeem Nani Wala has over Million Followers and 478 Million likes on TikTok.

Areeka Haq is another big name from TikTok. Areeka gained popularity mainly for her good looks and beauty. However, she also got a lot of backlashes after her original voice audio got leaked while celebrating her own birthday. In the video, she asked her friends, ”Happy Birthday Kon Gaye Ga.” After the video, she got heavily trolled by her fans. Areeka has over 10.9 Million followers and 292 Million likes on TikTok. She also has a YouTube channel with over 36K subscribers.

Ali Khan, famous for Ali Hyderabadi got into the spotlight for his awkward Slow-mo walking style wearing red sunglasses and dialogue delivery on TikTok. Despite getting all the hate and trolling, Ali still managed to get over 15 Million followers and 981 Million likes and became one of the top TikTokers in Pakistan.

Nousheen Saeed aka Dolly runs her own Beauty Saloon in Lahore and gained fame through TikTok. Dolly also works as a fashion model and is very active in the showbiz industry. Dolly has over 13 Million Followers and 369 Million Likes on TikTok.

Sid is a famous Pakistani rapper, singer, and model, however, he gained immense love and following after he joined TikTok and started making funny videos on the platform. People loved him for his expressions and on-point funny dialogue delivery in his short videos. The rapper gained 8.3 Million Followers and 590 Million Likes on TikTok.