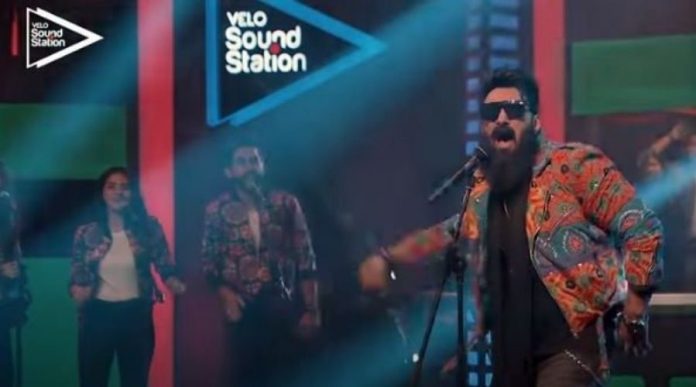 Bilal Maqsood, the veteran artist and member of the Strings band has sharpened and directed the new digital music series called ‘VELO Sound Station 2020.’ The music series will be available on YouTube.

The VELO Sound Station 2020 will be broadcast with 2-3 three songs (14 songs in total) in it’s five episodes and will release on every Friday, which have started on November 20, 2020.

Atif Aslam wore a shinny blue cobalt suit with the ruling pop song “Kadi To Hans Bol,” a much awaited song by all fans. Atif’s soulful vocals accompanied by catchy lyrics by Naseebo Lal has given the iconic song a new life.

The remake of Alamgir Sahib’s classical “Gagar,” by Umair Jaswal gave the legendary song a topical twist and will surely make you dance to the melodious rhythm.

If only we hadn’t liked the first number of dandia VELO Sound Station that made us fall in love with this song again!

The video featured Umair Jaswal wearing truck art jacket and played to a global audience with his strong voices and invading power that translates ‘Gagar’ into a fun and healthy number one with great punches and punches that will force you to stand up and dance the mood-lifter that is undoubtedly the party song of the year!

Are you ready to shake your head in the old 80s? Natasha Noorani’s melodic vocals will surely take you to the days of Disco with her original, ‘Baby Baby.’ This song is a groovy vibe with a surprisingly beautiful look and Natasha’s cute pink suit transports you back to the old Pop era. This song will definitely play in the recurrence of your playlist.

In the future, the music featured will be a combination of cover and original, revived with a distinctive and up-to-date music identity – from groovy tracks to rap – and you will meet modern fashion that combines modern Pop Culture enjoyed by Pakistani urban adults encouraged”by examining yourself about music, fashion and lifestyle.”

The VELO Sound Station 2020 will feature artists and producers with emerging acts, famous artists with many songs composed by Bilal Maqsood and some brought to the show by featured artists.

VELO Sound Station is a stage that clearly aims to bring back and empower Pop Music as well as an arbiter and initiator of future pop cultural trends in music and fashion.

“Pop Dont Stop” is the slogan of VELO Sound Station, which is a clear reflection of what VELO Sound Station sights. This expression works as a folk song because it connects the audience to their daily lives, culture and values.

Bilal Maqsood said that the upcoming series “is being viewed with the utmost emphasis on pop culture as a core theme and songs with a feature that works best for them by moving on stage and the crowd around, powerful.”