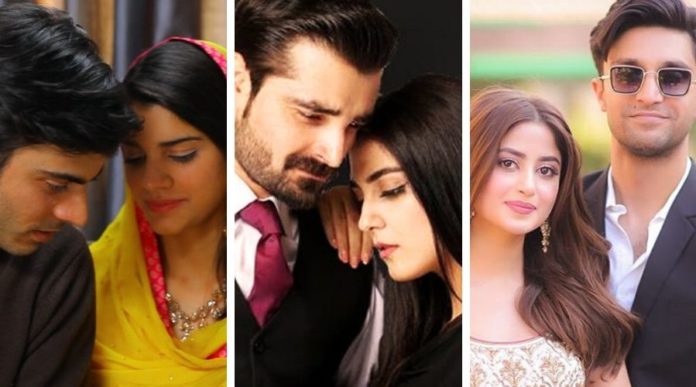 Pakistani drama industry is one that thrives on many themes but the best selling one is “love story”. Pakistani audiences love to love a good romantic story and since its inception, the drama industry have given us some gems that we cherish.

Here are the top five love stories that we love and five we hate:

If there is a drama that has literally set the standards of then sinking Pakistani drama industry was “Humsafar”. This Sarmad Khoosat directorial debut had it all, love, drama, intrigue, winning OST and much more. And what the drama stood on was the amazing chemistry between Ashar and Khirad.

The power duo of Mahira Khan and Fawad Khan stole the show as we waited every weekend to see the two together. Mahira as Khirad is pure grace and Fawad as Ashar is the smoothest man in the whole world. What starts off as a forced marriage slowly takes on a new colour as both characters start to spend time together only to find out that they both had misunderstood one another.

One of the most hit serial of all time is the Nadeem Baig directed “Mere Paas Tum Ho” which was the ultimate tale of betrayal and unreciprocated love. But the audiences from the get go did not like the love story between Danish(Humayun Saeed) and Mehwish(Ayeza Khan) as the husband had no backbone and the wife is too materialistic, which was alright as a messed up marriage was the premise of the story.

But what the audiences even hated more was that Danish and Mehwish try an attempt at getting back together, even when Danish knew just how evil Mehwish was. And the cherry on the cake was when Danish dies in the end when he meets Mehwish again, literally portraying the phrase “loving her killed him”.

“Pride and Prejudice”, that’s the term that best describes the love story that we get from the hit serial “Yakeen Ka Safar”. The serial was the first to see the now married super couple Sajal Ali and Ahad Raza Mir.

The story is of the brewing romance between two doctors, Dr. Asfandyar and Dr. Zubia, who have different ways to approach their work which makes them judge each other, only to realize that their passion is the same. Though there are some flaws in the story telling but the chemistry between Zobia and Asfand makes all other flaws feel minor.

Bin Roye was a blockbuster in the cinemas but things took turn for the worst when Momina Duraid decided to make it into a drama serial. The film did not have enough material to be split over 20+ episodes and that’s what happened as it became a slow paced, cry fest.

The story of unrequited love between Saba (Mahira Khan) and Irtiza (Humayun Saeed) is nothing but over reaction from Mahira’s end as she is shocked to find out Irtaza is in love with someone else. Though we love Mahira Khan but the character of Saba is so bad, we cannot come to like her. And even worst Saba is later forced to marry Irtaza after his wife dies, which meant more over reactions and tears from Saba.

One of the most progressive love story of our time is of Zaroon (Fawad Khan) and Kashaf (Sanam Saeed), which starts off with brutal hate, but with time the things that society holds on a pedestal like financial status while marrying, physical beauty and social standing based on where you live become redundant as the characters realise the strength of each other’s morals and fall for each other ultimately.

The drama shows that a wife can work and earn equal to her husband while still managing her home beautifully whereas the husband through his appreciation, love and support can build a strong family.

Yet another drama that was hyped on the success of the hit serial “Diyar-e-Dil” was “Sanam” with the extremely likeable on-screen couple of Osama Khalid Butt and Maya Ali, but Sanam was anywhere but good. The story of an unhappy married man and a clueless next door neighbor is cringy and really nothing what the audiences were expecting.

Aan and Harib are always roaming around near each other’s house making puppy dog faces and why would a simple girl from an extremely modest background comfort a married man like a therapist is truly baffling as it is not depiction of reality of the Pakistani society. The only good thing about this drama was Haribs psycho wife played by Hareem Farooq.

Causing explosions was 2019s hit serial Alif with its excellent story and chemistry between Momin(Hamza Ali Abbasi) and Momina(Sajal Ali). This drama by Umera Ahmed is the struggle of the two characters between what their heart wants and what the world wants of them, this broke the hearts of both throughout their long lives until their paths are crossed.

The bond between Momina and Momin intrigued the audience as they find in each other the lost piece of their soul, a companion in seeking the Almighty. Though they did not unite in the end, but a promise of uniting one day is there.

Yet another Maya Ali starrer that really got on the audiences nerves was “Mann Mayal” which was nothing but a cry fest. Starting off with a high, the drama crashed quickly as the two lovebirds are separated when Manahil(Maya Ali) gets married to an abusive, irresponsible man due to Salahuddins (Hamza Ali Abbasi) lack of backbone.

The love story was awkward to begin with as the lead characters are shown as Student and teacher. Well the drama moves along where Manahil cries some more and Salahuddin broods some more and Manahil verbally abusing Salahuddin through the whole run of the drama only to be saved by him from the clutches of her failing marriage.

One of the most amazing love stories present in the Pakistani dramas is between Hassan(Fawad Khan) and Bano(Sanam Baloch) in the hit “Dastaan”. This is not love that is seen today, the love that the two leads have for each other is “old love” that is untainted and absolutely pure set in the disputed India of 1930s-1940s.

Falling for each other in tender ages, Hassan and Bano longed to be together but are separated brutally when Bano’s family is massacred by Sikh Hindus and she is abducted only to lose her state of mind after being repeatedly abused mentally and physically. But when they are finally reunited, society comes in between once again and Bano is sent to mental asylum but Hassan’s true love remains as he visits to talk and be with her over the years.

Though Aangan was sold as the new “Dastaan” of 2019 but what we got was a messed up plot and unconvincing characters. Though the cast is star studded but the drama still felt wanting of more. This was especially true when it came to the love story between Jameel(Ahad Raza Mir) and Aaliya(Mawra Hocane), which was a very bad attempt at unrequited love.

Every time Aaliya and Jameel got together it was a cringe fest at best as Aaliya always masked her feelings and literally abused Jameel. And Jameel on the other hand was a weak male hero as he denied to work or help his family but claimed to love Aaliya forever, which just seemed like lazy and lies at best.

So do you agree with our list? Let us know