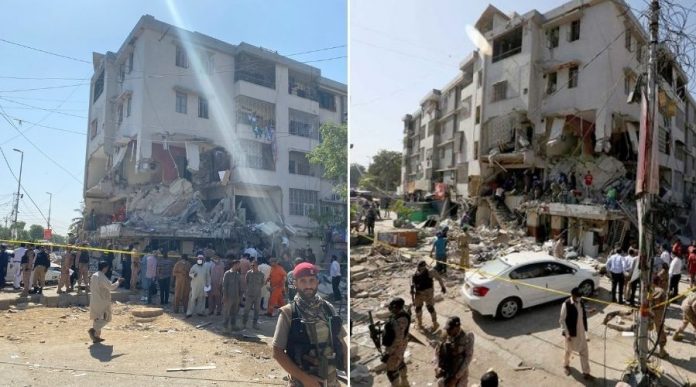 After witnessing a massive fire that caused an incredible loss in Lahore this week, yet another tragic event has taken place where at least five people were killed and 20 others injured in a massive explosion at Maskan Chowrangi in Karachi’s Gulshan-e-Iqbal.

Chief Minister Sindh Murad Ali Shah has taken notice of the incident and directed the commissioner Karachi to submit a detailed report on the incident.

The area has been cordoned off and the bomb disposal squad has arrived at the scene. Along with that Rescue, police and Rangers teams have also arrived and are investigating the scene. The police believe the blast occurred within Meezan Bank, the explosion was reported on the ground floor of the four-storey Allah Noor Apartments in Gulshan-e-Iqbal.

Footage shows the infrastructure of the building has been badly damaged.

Authorities have managed to shift the injured to the hospital but many believe that bodies may still be buried under the rubble.

PPP Minister Saeed Ghani, who visited the site of the blast, said that it seemed the explosion occurred in a residential building. He added that the cause of the blast would be determined later.

PPP Chairman Bilawal Bhutto-Zardari expressed grief over the lives lost in the incident, a statement by the party said.

On Tuesday, the blast in Shireen Jinnah Colony also caused five people to end up wounded.