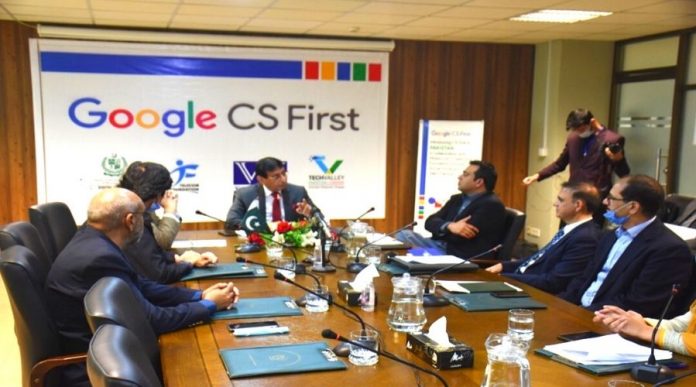 Google, in collaboration with government and private technology companies, has launched an online computer science (CS) program for students for the first time in Pakistan.

“The aim of the programme is to inculcate applied coding skills using gamification techniques in students aged between nine and 14 years,” the ministry said in a statement.

It was held at the Ministry of Information Technology (IT) and Telecommunication, which was attended by senior government officials, including the Minister of Technology.

While the Ministry of Information Technology will support Google to run the Google CS First program in Pakistan, TechVale Pakistan, who also attended the ceremony, the Telecom Foundation and the Virtual University will also support the program.

CS First is an early age coding program for kids aged between 9 to 14 and consists of a free computer science curriculum that makes coding easy to teach and fun to learn through video-based activities.

Under this program, children receive basic training and education in areas such as art, sports and game design.

“CS First Program is the comprehension of Prime Minister Imran Khan’s vision of Digital Pakistan and is an important stepping stone in introducing digitalisation in Pakistan”, said Syed Amin Ul Haque, Federal Minister for IT and Telecommunication.

Umar Farooq, CEO Tech Valley Pakistan said, “We have been working with Google in Pakistan since 2017. We want to help the youth of this country to better understand the importance of digital skills and realize the dream of a digital Pakistan”.

It will be piloted to the students of the TF schools covering three cities i.e. Karachi, Islamabad and Lahore. The program will be mainly divided into two parts; Train the Trainer followed by an orientation of students.