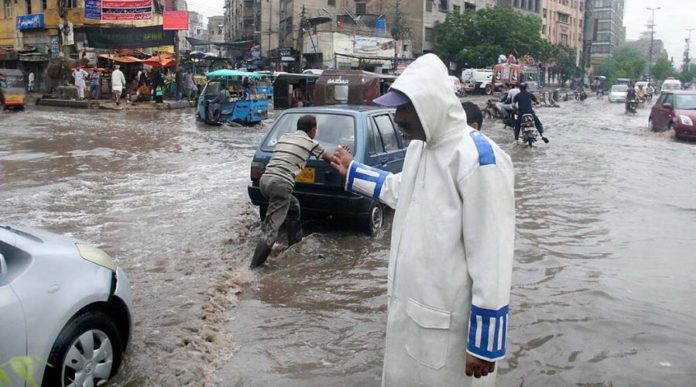 The Pakistan Meteorological Department (PMD) has predicted heavy rainfall, thunderstorms and urban flooding in Karachi and different areas of Sindh starting from Monday.

According to the PMD, a monsoon system is set to enter eastern Sindh on Monday, causing heavy downpours that will last until July 8. Karachi, Hyderabad, Thatta, Badin, Sanghar, Mirpurkhas, Tharparkar, Umerkot, Jamshoro and Dadu are likely to witness thunderstorms in this duration.

The Met department has advised all concerned authorities to remain “alert” and take necessary precautionary measures during the forecasted periods in order to avert any unfortunate incident.

With regards to the forecast, chief meteorologist Sardar Sarfaraz said that Karachi was likely to see a windstorm prior to the rains, with gales picking up speed and blowing at 60 kilometres per hour.

Meanwhile, the Sindh Solid Waste Management Board (SSWMB) managing director stated that the SSWMB had finalised a strategy to cope with the monsoon rains and provide relief to the masses.

The MD further said that complaint centres would be operationalised in each zone of the metropolis to resolve public concerns, adding that complaints could be filed at the SSWMB WhatsApp number 0318-1030851.

Heavy Rain in Karachi to continue till Tuesday: People sharing devastating pictures and videos on Twitter