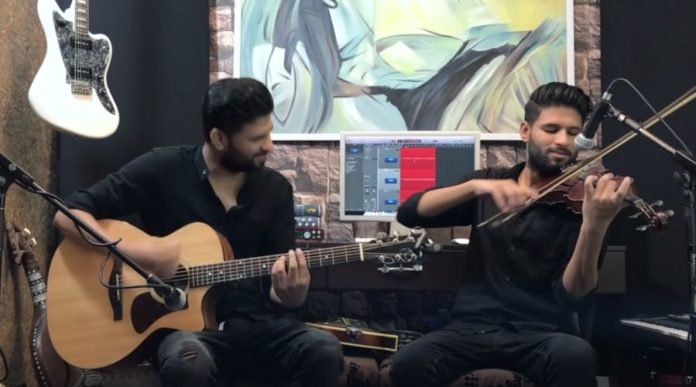 The success story of deserving talented people is what truly inspires millions and one such story is of the Leo Twins. The dynamic duo consisting of twin brothers Haroon and Sharoon is one that has delivered amazing music only in the few years they have active in the industry.

Finding their passion through their elder brother who plays tabla at the Church, paints, and curates art at his own art gallery and with a little luck, Leo twins were able to embark on their musical journey starting from getting trained from the maestro himself Ustad Idrees Ahmed Khan.

Their fame truly exploded after they were discovered by Xulfi from Call, who was producing Nescafe Basement Season 3 at the time and came across this video and was impressed by the skillset. Now they have become not only the permanent part of the musical ensemble but also went on to work with big names of the industry like Atif Aslam and Rahat Fateh Ali Khan.

Here is some of the best work done by the talented set of twins.

Nescafe Basement was a blessing for the duo as they were able to learn many more instruments and expand their skillset. “The launch of our first instrumental track online caught the attention of Xulfi bhai from Nescafe Basement who featured the musicians in the previous seasons.” Haroon said

“I still remember, it was June 6th and I got that phone call from Xulfi bhai to be a part of Nescafe basement. I was speechless”, Sharoon said

The twin brothers have created some of the most amazing covers to exist for Ed Shereen numbers, Game of Thrones OST, Havana, and Michael Jackson’s “They don’t care about us”.

“The love for eastern classical music was there since we started off but we are now focusing on mixing eastern and western tunes and reintroducing our traditional instruments such as tabla rubab and harmonium”, said the twins.

The latest cover created by the duo that is generating a lot of buzz is of Ertugrul Ghazi’s theme music during one of their famed quarantine session.

While talking about creating covers, Leo Twins had this to say, “The idea came first to do this by thinking about the eastern instruments we could play and initially generated by Xulfi bhai and it turned out beautifully. Making music is not difficult for us, in fact, it’s the best way to us being instrumentalists to express our feelings through it”.

Yet another quarantine session brought us the beautiful “Tujhe Kitna Chahein Aur”. “We have been fortunate to have already performed at Mohatta Palace and Wembley Arena in London with Ustad Rahat Fateh Ali Khan. In the future, we would like to do more world music and collaborate with international artists. Till this COVID-19 pandemic is over we will continue to entertain our listeners with these Quarantine Jamming Sessions,” Sharoon said.

Beautifully performing a back and forth between violin and guitar is “REHMAT NAAL”
“Violin is a very demanding but a complete instrument. It requires a lot of skill but has unmatched versatility. With our natural chemistry it is very easy for us to understand and complement each other. We love to constantly jam and this is what brought together the idea of quarantine sessions,” says Haroon.

“Sayonee” cover is yet another masterpiece where the violin is played to perfection by the brothers. Having been inspired by Mozart and Beethoven, the twins combine the eastern and western instruments to perfection in their covers.

“We also have a very strong connection with our own roots and our recreation of the golden melodies such as Saason ki mala by Nusrat Fateh Ali Khan, Lambi Judai of Reshma Jee, and Ay watan kay sajeelay jawano of Madam Noor Jahan were widely appreciated.” Having been part of Pakistan Super League team Peshawar Zalmi’s team anthem, Hum

Zalmi, their aim is to now work with international artists. Have a field day during your quarantine time by listening to the amazing tunes produced by the talented duo that are definitely to lift your mood.