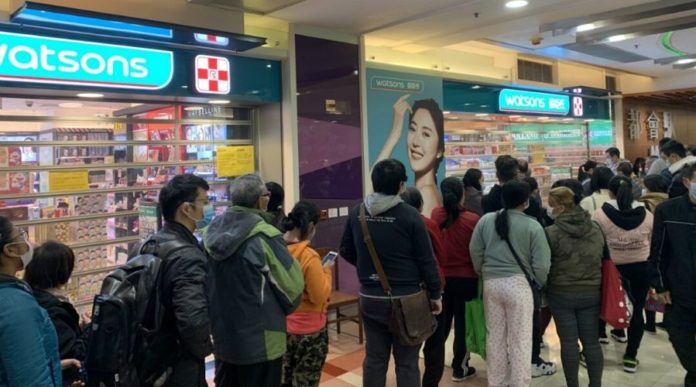 Provincial government eased restrictions in Karachi on Tuesday after remaining in lockdown for almost 2 months. Malls throughout the city were allowed to remain open after Supreme Court’s order which are to open from 8 am till 5pm.

People are emerging out in huge numbers in order to shop for the Eid festivities. According to rough estimates, there are 40 small and huge malls in Karachi and in each mall, there are 400 shops on average. At around 3pm, a huge line was seen outside the Dolmen Mall at Tariq Road.

Though the Supreme Court denies that Pakistan is amongst the country that is seriously hit by the pandemic, the death toll of confirmed cases in the country continue to grow by the day.

The narrative being used by the Prime Minister has put the whole nation at crossroads as he says that even if the nation survives corona virus, we won’t be able to survive the economic downfall.

Malls around the city are taking precautions and are not allowing anyone without the mask and giving proper sanitization stations across the mall. Dolmen Mall’s public relations and external communication officer Palwasha Sikender told The News they had limited the headcount of people entering the mall and even entering different outlets.

“There’s a kiosk outside the mall for gloves and masks,” she said, adding that children under the age of 12 and old age people are strictly not allowed. “We strictly follow social distancing in the mall. All the retail staff have also been briefed about it,” she explained, adding that their trail rooms for clothes’ buyers were also closed and they were encouraging cashless payments from customers, “not that cash payments are completely not allowed.” Atrium Mall’s operational manager told The News that they had been sanitising all buyers and even shopkeepers.

He said they were making sure that social distancing was observed. “No one is allowed to enter the mall without a mask,” he said, adding that children and people above the age of 60 were not allowed inside the mall.

The Atrium Mall, he said, had the capacity to have at least 15,000 buyers at a time easily and they allowed only 1000 to 1500 buyers inside the mall at a time. According to a rough estimate, he said, on Tuesday alone 4000 to 5000 buyers visited the mall.

Around 10% of the families, he said, were asked to go back, as they either had kids or brought someone above the age of 60 with them or had no mask with them. “Few made their kids sit in the waiting area outside the mall we have established,” he said.

Meanwhile, the Lucky One Mall’s assistant manager activation, Tanzeel-ur-Rehman Khan, told The News they had marked foot stickers outside and inside the mall on each floor. But it is evident though from videos emerging on the social media that people are not observing any precautions hence increasing the danger of the spread as more people get out of their houses.

Experts in Pakistan have warned against the premature easing of lockdown restrictions, fearing an exponential rise in infections. One healthcare worker said: “Everyone’s scared and exhausted. But we are fighting, we are pushing the limits. All we ask is that government and people understand that they can help us help them by staying at home and providing us quality protective gear.” On Tuesday Karachi Commissioner Iftikhar Shallwani had issued an administrative order and the Standard Operating Procedures (SOPs) for shopping malls.

“The shopping malls shall be frequently cleared with disinfectant. All the deputy commissioners of the Karachi division are directed in the order to monitor the observance of the SOPs in shopping malls and take action in accordance with the law and implement the directives of the Supreme Court.”

With at least 43,966 confirmed cases and more than 900 deaths since March, and at least 500 Pakistani healthcare workers infected too, one might ask that if the decision to open the malls in the city is a wise decision or one which will bring unprecedented dangers.