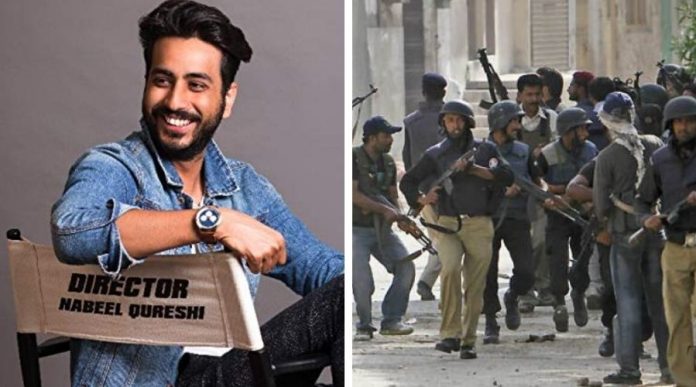 OTT Platforms are blowing up worldwide with their massive popularity, demand and content. Pakistan has also joined trendy new way to view content, previously Mehwish Hayat’s web series got good critical acclaim and commercial success and now director extraordinaire, Nabeel Qureshi is all set to bring out a new web series that is about Layari Gang wars.

The web series based on the infamous Lyari Gang War of Karachi, the series has been written by Ali Abbas and Basit Naqvi, who also penned the script of Pakistan’s official entry to the Oscars Laal Kabootar.

Yes that's true we at @FilmwalaP making a web series on "LYARI GANG WAR" HV been working on it for quite long time & this is the best time to announce ! @fizza999 thankyou @galaxylollywood https://t.co/7WZLqid4pz

The work on the web series has already been started and soon shooting will begin too.
Nabeel further shared that they are planning to release the series on a Pakistani OTT platform.

Nabeel Qureshi will be producing this project yet again with co-producer Fizza Ali Meerza, with whom he produced Load Wedding and Na Maloom Afraad.
Meanwhile, Fizza said

“The Lyari Gang War has been making news yet again for a while now, so we thought this was a good time to start working on it,” said Meerza. “It’s too soon to reveal details, but we have completed our research on the subject and our script is in completion stages as well. We plan on covering the incidents from the beginning. We plan to start shooting in winters as the weather is nicer and it’s easier to work then.”

“I wouldn’t want to reveal too much but no, we haven’t really looked upon the options on who should we star in this web series,” Meerza went on. “We plan on covering the incidents from the beginning. The web series will not only shed light on the gang war in Lyari but also the powerful impact it had on the city.”

“It will be an action thriller. We’ve put our heart and soul into it,” Meerza continued. “I’ve been born and raised in Karachi. Nabeel has lived a huge chunk of his life in this city. We are from the streets and that is why we take pride in covering even the gory details of this city. Lyari gang war is a massive part of Karachi’s rich history; we would want to talk about it.”

She added that the cast has not been finalised as yet and that the project is in its initial stages.

Meerza commented on how they have made an elaborate plan for the film’s promotions “The promotions are a massive part of any release. We want to do it properly and hence we are just being patient at the moment. When things are better and we are given a go-ahead by the authorities, we shall get right to it.”

The production will begin soon under the Filmwala Pictures banner.