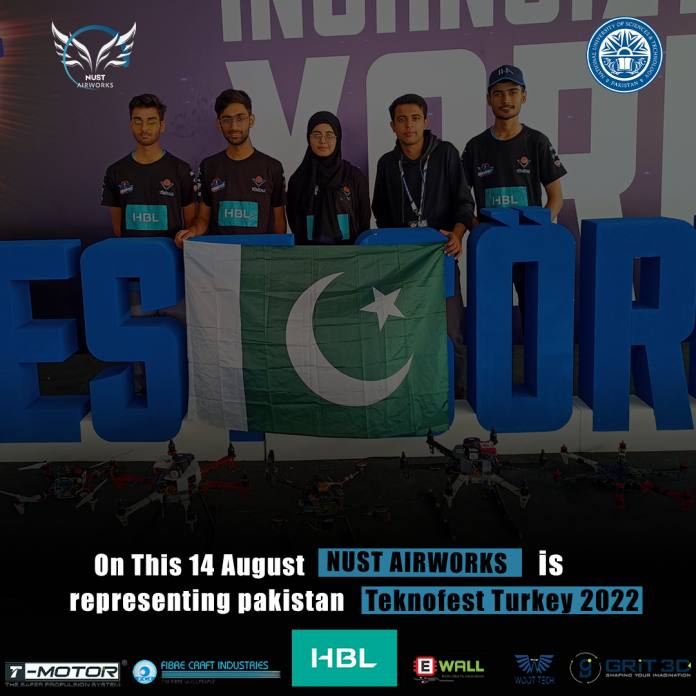 Beside release of the new national anthem which is the source of pride for the country on its 75th independence day, the youth of Pakistan is also striving to paint the nation’s name in shades of determination and success on the international stage.

On this day, NUST Airworks, through the support of Habib Bank Limited (HBL), is participating in Teknofest 2022 with its highly innovative decentralized swarm of drones which are deployed for search and rescue missions. The drones will collaboratively search for markers placed on the ground and will deliver payloads to the respective markers in a decentralized manner.

The competition is being held at Kutahya, Turkey from 9th-14th August. The team set off for their memorable journey- which is the culmination of months of hard work- on the 6th of August to Ankara, Turkey. The team had the opportunity of witnessing various UAVs employed by the Turkish Armed Forces as well as their scaled models. Moreover, The team got a chance to meet Turkey’s minister of industry and technology, Mustafa Varank, who appreciated the team’s efforts in developing a truly unmanned aerial system.

Team NUST Airworks is an undergraduate student team, based in NUST-PNEC, that designs and manufactures fully autonomous drones. The team has been competing on a national and international stage since 2016.

Since 2018, the team has been representing Pakistan at the U.K’s IMechE UAS Challenge, one of the most prestigious international university-level drone competitions. The team has won 9 awards in 3 years, including the titles of:

It was also a part of McDonald’s famous campaign: McDonald’s PK: The Ingredients for Success.

The primary focus of the team’s project is to make it as economically feasible as possible and take Pakistan a step ahead in the field of drone technology.