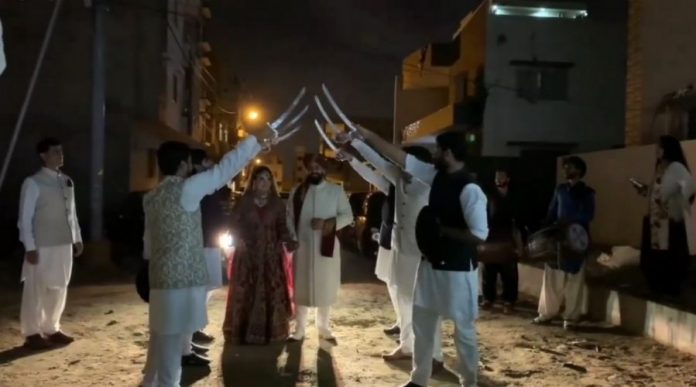 Armored with shield and swords, marching their way through the crowd is not a military attack scene, rather it is the latest video going viral of a bride and groom entering their wedding along with an entourage of iron-clad men to the theme song of “Ertugrul: Ghazi”.

Yes, the love of “Ghazi: Ertugrul” has taken on a new color in Pakistan as a newlywed bride and groom decide to start their new life by giving a performance on the much-celebrated theme of the famed Turkish historic epic.

The Bride and Groom have an entire entourage of young men coming ahead of them armored with swords and shields and paired into the sets of two. Each pair goes on to perform a little stunt and then move on to the next pair. Finally chanting out the pre-war chants, the men joined their swords overhead for the couple to enter through it.

This proves the enthusiasm for the historic drama the Pakistani have. And here are some developments that have happened after “Ghazi: Ertugrul” aired in Pakistan.

Not limited to this, Pakistan also cast Halima Sultan aka Esra Bilgic as Brand Ambassador for major Pakistani brand. Esra has become one of the most popular and loved actress by the Pakistani audience. After famously getting signed by Pakistani Mobile giants “QMobile” for their latest product release campaign, becoming their new Brand Ambassador”, Esra has become the face for Jazz for the year 2020.

PTV had previously shattered all records worldwide with crossing 2 million subscribers on the official YouTube channel.

“Ertugrul: Ghazi” just finished airing its first season in Pakistan, PTV has started airing the much-awaited season 2 of the Turkish epic in Urdu.