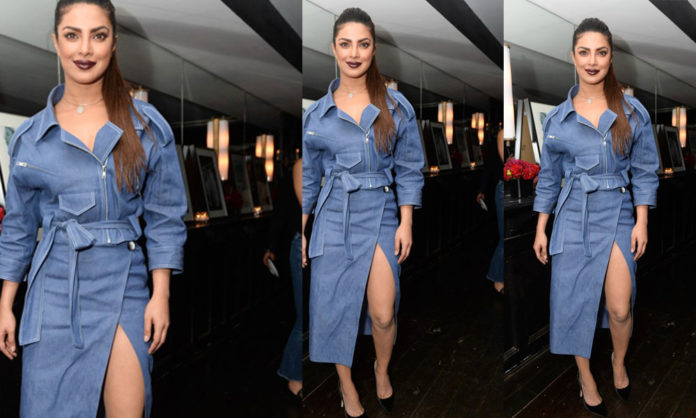 Bollywood’s IT girl Priyanka Chopra has been making waves in the Hollywood circuit lately.
She has captured the hearts of millions by playing the part of Alex Parish on her hit tv show Quantico. Riding on the waves of the show’s success , she later appeared on Jimmy Fallon’s talk show twice and captivated viewers.

She has become a household name in the west today and a part of the Hollywood film fraternity now that she is going to star in a Baywatch sequel alongside Zac Efron and many others. After hosting the Primetime Emmy’s , she is all set to appear on The Ellen Show alongside Miley Cyrus.

While everyone is waiting eagerly for her appearance on The Ellen Show, she was spotted at an NYC book launch looking absolutely exquisite in a denim dress and dark lips.

Her Comments on Ban on Pakistani Artists in India

While she is being lauded in Hollywood , she was criticised back home for lending her voice out in support of Pakistani artists. After Pakistani artists were banned from working in Bollywood following the attack by Pakistan in Kashmir , Priyanka spoke against the ban.

She said, “It’s tricky because first of all artists and actors are always held responsible for every bigger political agenda that happens in our country. Why are only we reflecting it? Why not businesses, why not doctors, why not politicians,”

She also added, “I am extremely patriotic. So, whatever my government decides is important to keep the country safe. I go with that, but at the same time, I don’t believe that artists are a representation of — at least there hasn’t been an actor who has done something which has harmed someone’s life out of malice or anything.”