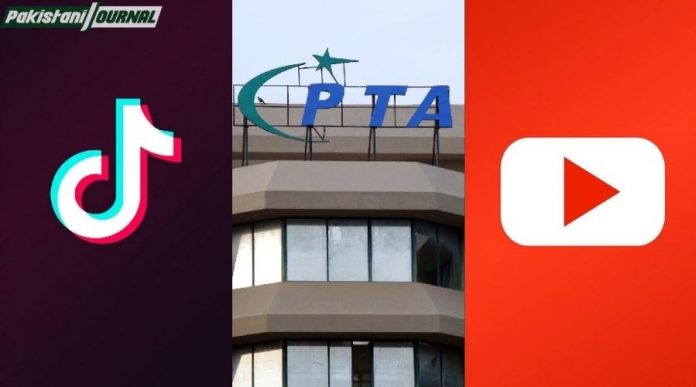 This week The Pakistan Telecom Authority (PTA) has asked YouTube and TikTok subsequently to regulate and block vulgar content.

In a press release issued Thursday, the authority said some YouTube videos also contain hate speech targeting different Muslim sects that has “extremely negative effects” on viewers.
The PTA said in a statement that it had approached YouTube to ensure blocking of objectionable content and to prevent the use of its platform for disseminating such content.

In addition, the platform has also been directed to put in place an effective content monitoring and moderation mechanism so that the unlawful material is detected/deleted and not accessible within Pakistan.

YouTube did not immediately respond to a request for comment on Friday, and a PTA spokesman declined to speak about the authority’s next step if the Google-owned platform does not comply.

Chairman PTA had an online meeting with senior management of TikTok.

“Keeping in view the growing concerns in the society with respect to content on the platform, the PTA chairman had an online meeting with senior management of TikTok,” according to an official statement issued by the telecom authority.

Press Release: PTA has asked TikToK to block the vulgar, indecent and immoral content for viewership in Pakistan.
Keeping in view the growing concerns in the society with respect to content on the platform, Chairman PTA had an online meeting with senior management of TikTok. pic.twitter.com/HMJPBQxbgt

In its response, TikTok shared a content moderation mechanism for removing any potentially harmful or inappropriate content from its platform, saying that Pakistan is one of the five markets with the largest volume of removed videos.

In a recent attempt to tighten control, lawmakers in Punjab, passed a bill last month that seeks to put publishers in prison if they print or import material with “objectionable” content.
The Punjab governor has not yet signed it into law.