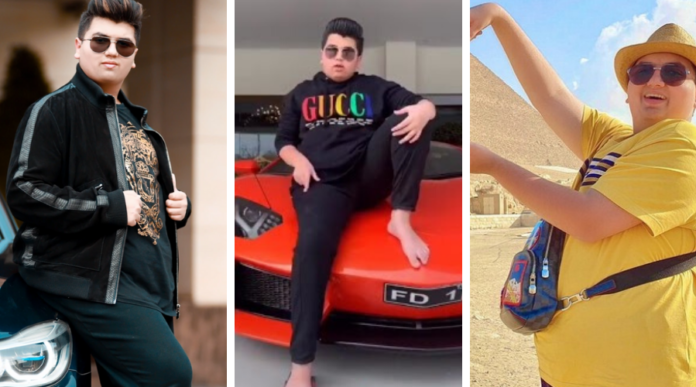 Dubbed as the “Richest Kid in Pakistan”, Shameel Zahid is one of the biggest TikTok stars in Pakistan with 1.6 million followers and 29.8 million likes on his profile.

The kid’s father has an IT business, but Shameel has no interest in it. He wants to continue his journey on TikTok. Currently, the TikTok star owns two Lamborghinis as per his own claims.

Shameel has done many promotional activities for brands on his profiles and collaborations with some of the biggest names on social media in Pakistan. Shameel produces a range of content that spans from lip sync videos to travel vlogs to comedy skits and much more.

Here are the top 10 TikTok video of Shameel that you need to check out:

Smashing an iPhone worth Rs.1 Lac is what earned this video 8 million views as Shameer announces to his followers that they can win a new iPhone if they start following him on Instagram.

Earning more than 4.8 million views is the video where Shameel himself is introduced by his friend as literally Pakistan’s “FoodPanda”. Often dragged for his weight, Shameel knows how to turn the bullies on their heads now that he himself is joking around about it and earning millions of views.

Resonating with many, this video captioned “Mere Halaat Aise Hain” is a perfect depiction of life in quarantine due to the outbreak of global pandemic. Shameel is shown looking out the window, snacking continuously, trimming his own hair with no end to the boring days.

Garnering 4.9 million views is the creative video where Shameel out of sheer boredom due to the country wide lockdown has started creating video with the help of his switches. Playing in a perfect symphony, Shameel works with his light bulb switches as someone in the background sings “Kajra Re”.

Documenting his journey from Pakistan to London comes the video which generated more than 6 million views. Shameel here can be seen travelling in style with his fanny pack on, he boards business class of an airline, checks into his hotel and feeds the pigeons in London.

The video that really made Shameel popular with the masses is the “Rich Boy Check” video, where Shameel shows is incredibly beautiful house that is decorated luxuriously, a grand wardrobe, a Jacuzzi laden washroom, plethora of luxury tech and automobiles and also cash in his safe.

The video that generated a lot of heat by Zaid Ali T and Shahveer Jaffery was “Richest boy in Pakistan” on their YouTube Channel, where they visited Shameel and asked about why he was so rich. Shameel also made a TikTok of their visit, which gained more than 6.5 million views.

With 6 million views is the dream sequence video showing Shameel wiping his Mercedes when someone comes and says “Bhai wo ja chuki hai” and Shameel is jolted from his dream and we see that he is only left with a mini toy car rather than the real thing.

Living the ideal life, Shameel in this video shows his fans how the journey and process of getting his own personalized M&M’s goes like. The video shows his snap being taken then he goes on to push several buttons and magically rains M&M’s with Shameels face on them.

Joining hands with Pakistan’s biggest TikTok star, Shameels latest video featured the one and only Jannat Mirza. Both the TikTokers are shown walking in style towards the camera while “Sundar Sundar” is blasting off in the background.

So are you following the richest kid in Pakistan and thoroughly getting entertained? If not, then these top 10 videos are a good place to start.