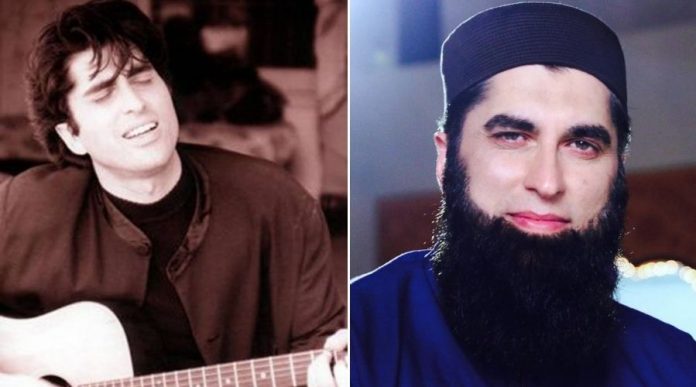 Even though Junaid Jamshed left his singing days way behind him, to become a religious scholar but still some of his songs from the Vital Sings days will forever tug at our heartstrings. Junaid Jamshed requires no introduction. The singer produced 80s tracks, rock albums, and even national songs. With all the options, it’s so difficult to choose the best Junaid Jamshed songs.

Whether it was being a pop icon, an entrepreneur, a religious preacher, or social work whatever Junaid Jamshed touched turned into gold. It’s such a pity he left us so early but the music like Dil Dil Pakistan and many more we grew up listening to remains in our heart. He was a true patriot at heart, the man would go to any extent to help his nation and its people. We’ve compiled a list of some of him, let’s remember our huge part of childhood once again.

Nothing can beat this song. Wherever you go, either you watch a cricket match, celebrate a victory, or celebrate any national occasion, everything is incomplete without this song. This song became a patriotic anthem of Pakistan and gave Junaid Jamshed international fame. The song was covered by various singers and was remixed on numerous occasions but nothing compares to the soulful voice of Junaid Jamshed.

The name itself must’ve revealed whose anthem it must be. Yeah, you’ve guessed it correctly. The legend partnered up with some of the 80s renowned artists to make the first official anthem of Pakistan Tehreek-e-Insaf. On the BBC playlist, this is his most listened song.

Sanwal Saloni is a song from Vital Signs second album “Vital Signs 2.” In its music video the pluralistic side of Pakistan was highlighted.

Tum Kehti Ho was JJ’s single from his  album “Dil Ki Baat.” The song was later used in the serial “Zindagi Gulzar Hai” on “Hum TV.”

If you listen to a song it’s either a love song or a sad song about breakups. This song is so unique that it lies in both categories. JunaidJamshed’s this song is from “Vital Signs” third album also named “Aitebar.”

Us Rah Par is from Junaid Jamshed’s album with same name. It’s the story of pathetic love the stage everyone has been through. You’ll surely adore this song.

Qasam Us Waqt Ki is another patriotic song of JunaidJamshed which is dedicated to the brave army of Pakistan. This is also from his second solo album “Us Rah Par.”

Both JunaidJamshed and Vital Signs were so diligent because they added tribal tid-bits into their songs so efficiently. It’s also a must listen song of him.