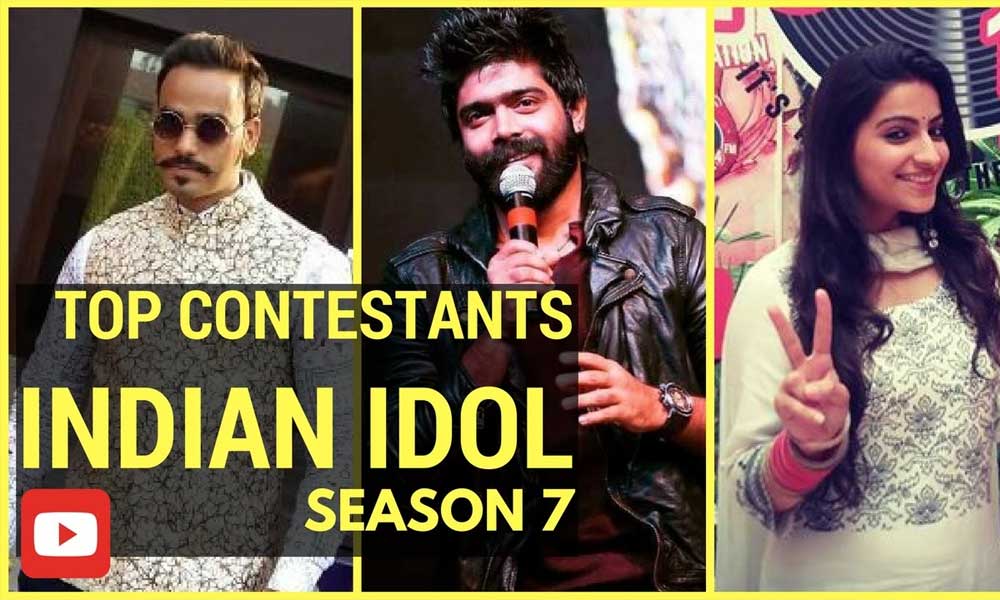 After searching city by city for the talented singers, finally, we have got the best contestants that are in full swing to cast their musical spell on the audience. Here are the 10 best contestants of the Indian Idol 7 who we think will be competing with each other to make their spot in the upcoming rounds.

Hailing from Chennai, Maalavika Sundar is a born Carnatic Singer and fame of Tamil.  She is a Tollywood playback singer who started her career in singing with the song “Nuvvu nenu kalisunte” for the movie Gangotri.  She wants to explore her Bollywood too and that’s the reason she auditioned for Indian Idol. All eyes are on her as she is among one of the strongest and toughest contestants in this season.

Indian Idol Season 7 is filled with talented and successful contestants. LV Revanth is one of the contestants who is also a Tollywood singer. With his soulful voice, he won hearts of not only the judges but also of the audience too. Revanth has worked in Bahubali as a playback singer and he has also sung Dilwale movie song. To explore his options in Bollywood, Revanth wanted to become a part of Indian Idol and see how he can rock the Bollywood too.

Another talented singer of this seasons includes PVNS Rohit. The young and talented singer have got such a sweet voice that made the judges fall in love with him. Hailing from Hyderabad, Rohit is all set to make his Indian Idol journey to let his voice reach as many people as possible.

The next contestant in line is a sweet girl that has won our hearts with her Melodious voice. Hailing from Ghaziabad, Bharti Gupta has a god gifted talent and is all set to make her parents proud. Her parents are deaf and mute but she is blessed to have such a soft voice.

The 27-year-old Mohit Chopra who belongs to Jahangirpur, Delhi is among one of the contestants who’s magical voice impressed all the three judges. Manoj is a professional singer who sings in Jhagrans and in various cultural festivals. Let’s see how he is able to make his mark in Indian Idol.

The soulful singer who hails from Jammu and Kashmir, Ehsan Asgar is one of the talented singers who has done his graduations and runs a cosmetic shop in Kashmir. He comes from a very small area where people are living in fear due to the tensions prevailing in the region. Ehsan wants to live his dream and therefore has left everything to become the singing Icon.

The boy from Bhubaneswar who won Anu Malik’s heart has got the ticket to be a part of Indian Idol. Biswajeet Mohapatra performed the song “Is Dil ka Kya Karun” in a different way and mesmerized the judges.  He is a stage performer in Odisha and is one of the toughest competitors among many contestants.

Thupten Tsering who hails from Arunachal Pradesh has made everyone stunned with his voice. He has proved that even if life brings difficulties and challenges no one can stop you from reaching your dreams. Despite being handicapped, he has made everyone proud with his melodious voice. Indian Cricketer, Sachin Tendulkar was also in awe of Thupten and tweeted about him too.

The Punjabi Boy, Tajinder Singh who hails from Faridabad is one fine singer. The Punjabi sensation is surely set to give a hard time to fellow contestants. during the audition Sonu Nigam even complemented him saying he would have cried if it were any longer.

Indian Idol Season 7 brought us many contestants who have faced difficulties in their life but didn’t let their dreams shattered. one such contestant is Dolly Singh who has faced difficulties in her marriage from Jharkhand who has cast a musical spell on the judges. Dolly Faced many hard times in her life where her in-laws destroyed her face. This singing journey will give Dolly a new identity to pursue her dream to become a known singer.

The prettiest of al contestants is a newly married girl Manya who looked beautiful on her auditions. Manya will sure bring her melodious voice and good looks to Indian Idol 7 platform.

The young and heard working boy from Itanagar, Arunachal Pradesh has stunned everyone with his talent of singing in both male and female voices. Jeli Kayi not only impressed judges but stunned otheer contestants too.

We wish all the contestants a very good luck as they embark on the musical journey in the Indian Idol 7.