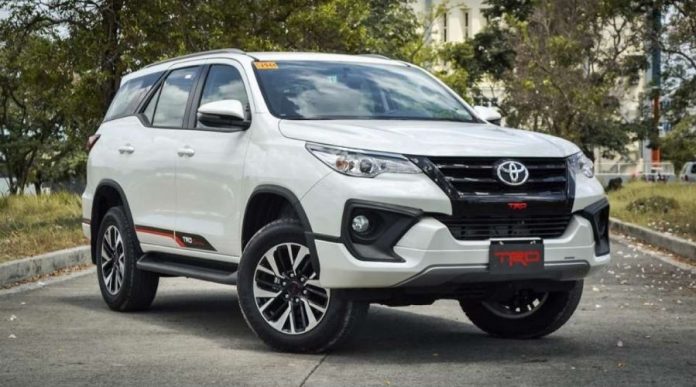 The SUV had been known as Sigma4, FortunerV and FortunerG three earlier variants.
The cosmetic upgrades include a new extended front bumper with a skid-plate, an all-black grille with a TRD decal beneath the Toyota emblem, blacked out B, C and D pillars, some black trim around the fog lights, a black and white striped TRD decal that starts from the middle of the front doors on either side and runs up till the rear bumper and a new set of 18″ alloy rims.

Fortuner TRD borrows the engine and transmission from the Fortuner Sigma 4, which means that it has a 2.8 liter turbocharged 4 cylinder diesel engine that makes about 180 horsepower at 3400 RPM and a rather healthy 450 newton/meters of torque at 1600 RPM.

Like Fortuner G, TRD comes with old-style analog meters, dual-zone auto AC, sunglasses holder, and smart entry and smart system. Toyota Motors have installed leather seats in the car to give an executive look to the interior. Furthermore, the SUV has ample cooling storage in the dashboard.

In a notification that was issued by Toyota IMC in April 2020, the price of the new trim is reportedly Rs. 9,390,000. Though dealers have not been notified regarding the launch or the booking of the vehicle.