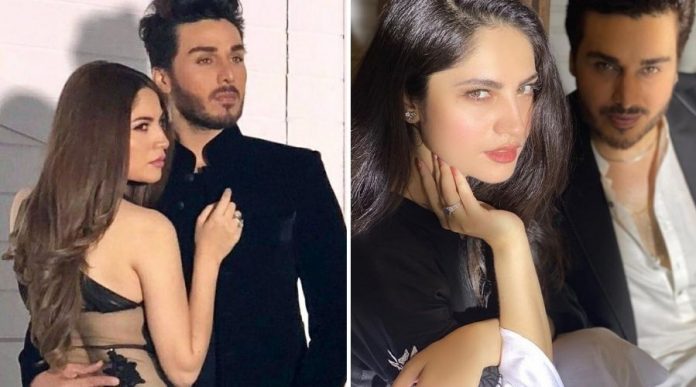 With “Bandhay Ik Dor Se” and “Bikhray Moti” making strides, leads Ahsan Khan and Neelam Muneer have been paired together to star in a new serial, “Qayamat”.

This will mark as the second project that the actors have together as previously they starred together in the comedy-thriller movie, “Chuppan Chupai”.

The serial will be produced by 7th Sky Entertainment and stars Amar Khan, Haroon, Shabbir Jan, and Saba Faysal in key roles.

Director extraordinaire Ali Faizan will be directing the project with Asad Qureshi and Abdullah Qadwani producing the much anticipated project.

Talking to a local magazine, Ahsan Khan, revealed,“My character is not any run-of-the-mill character.”

Adding more to it, he said, “I’m slightly picky and choosy about what I do, and this falls under the experimentation category.”

“My role has shades of slightly negative, weird – different aspects.”

The plot of the drama serial as revealed by the starlet is not an effortless love story, as he said, “It’s not a simple love story.”

Theme of the serial include “issues that women have to face when they have to take a stand against the wrong being done against them. Or how children internalise traits of bad parenting and apply them on their own lives.”

“Not to forget, Neelam is one of my favorite actresses,” the Udaari star added
The release date of the drama serial has not been revealed yet but it is to air in 2020.