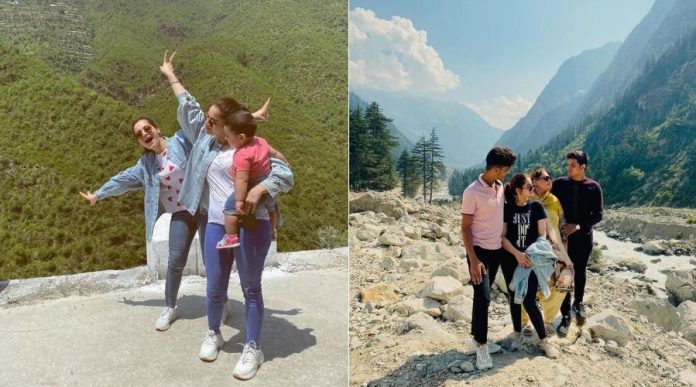 Recently the lockdown in the country that lasted for more than 4 months due to widespread coronavirus has finally been lifted and tourism has been opened as per Prime Minister Imran Khan’s directive. Taking advantage of this, superstars Minal Khan and Aiman Khan made plans and are enjoying their vacation in the north of Pakistan.

The sisters took to Instagram to take their fans along with them on a journey.

Sporting matching outfits, Minal Khan along with sister Aiman Khan can be seen enjoying their time together up north alongside her baby.

Aiman does mention that this was a short trip rather than a long-planned out vacation as being actresses they would have tight schedules.

Aiman Khan, the mother is all loved up with her daughter.

Here the sisters are seen enjoying a fresh drink of water in the heat of August.

Brining to view the beautiful mountains and greenery of Pakistan, Minal Khan poses as a happy girl.

Seen hiking and running on the mountains, Minal Khan is having a perfect heyday in the north.

Minal Khan also spent the Independence Day up in the mountains and made a perfect snap while carrying a giant green flag of Pakistan with her.

Both sisters are considered ace actors of the industry but Aiman Khan since her marriage has been on a hiatus while Minal Khan has been making strides recently with her performance as Nisha in “Jalan” as a psychotic girl who is set to ruin her sister, receiving massive praise from the audiences.