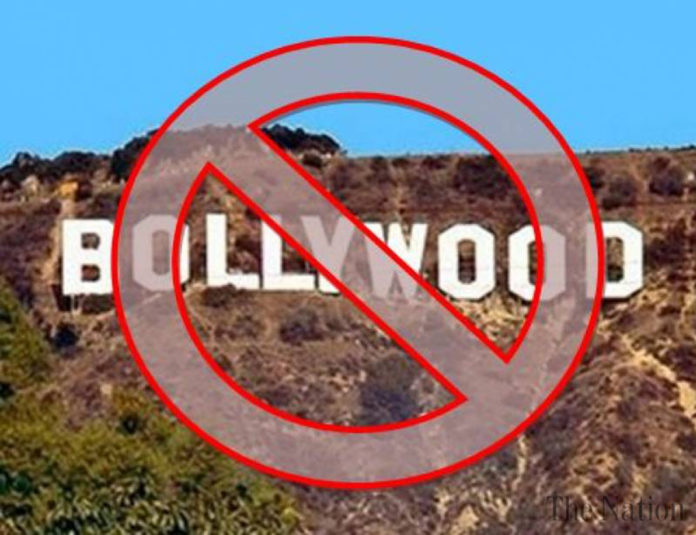 A petition was filed at the Lahore High Court seeking a ban on Indian movies in the country until the resolution of the Kashmir issue. The petition, filed by Advocate Azhar Siddiqui saying that exhibiting Indian movies in local cinemas hurt the sentiments of the people of Kashmir and Pakistan, both of whom who are against the atrocities committed by Indian security forces in the region. Indian movies, being opposed to Pakistan’s Kashmir policy, are a big hurdle in the freedom movement of the people.

Petition pleaded:
“To express solidarity with Kashmiris the Pakistani government should be ordered to put immediate ban on exhibition of Indian movies across the country,”

The petitioner also said that the Pakistani government should respond by banning Indian movies after a firm response of India in which the government and other extremist organizations (MNS) are threatening Pakistani actors to leave India after Uri attack.

The court will fix the date of a hearing next week.

On September 18, 2016, 18 soldiers were killed in a terror attack on an Army camp in Uri in Jammu and Kashmir. After Uri attack, MNS issued a 48-hours ultimatum to all the Pakistani actor & artists to leave India. They also made it clear they won’t allow Karan Johar’s ‘Ae Dil Hai Mushkil’ and Shahrukh Khan’s Raees because they have Pakistani stars Fawad khan and Mahira khan.

Due to MNS threats and pressure, Zee network’s Subhash Chandraji has stopped all Pakistani dramas on Zee Zindagi, Colors channel is not taking any Pakistani celebrity on Bigg Boss, Pahlaj Nehlani has shown their support to MNS by not taking any comedian from Pakistan in Comedy nights Bachao and Radio Mirchi is stopping all Atif Aslam’s program.

If Indo-Pak ties worsen and Bollywood films are banned in Pakistan, Pakistani Industry might suffer 75% of loss in their business.

Atrium Cinemas Managing Director Nadeem Mandviwalla said, “70% of the business comes from Bollywood and Hollywood. There is no alternative. If the ties worsen, it is going to affect everything. There’s a possibility that theaters would be shut down temporarily.”

He further said,“A temporary suspension until the situation gets better is going to affect us, but we can survive. If it doesn’t, cinema owners might have to close shop or shut a few screens down to cut costs. We don’t produce enough films to sustain ourselves throughout the year. We need to produce at least over 50 films annually.”

Former Sindh Board of Film Censors chairman Fakhr-e-Alam shares his opinion on the situation that the ban would result in going back to the days where our screens were shut down because there weren’t enough movies.

Cineplex Cinemas Assistant Marketing Manager Abid Ali Zaidi said the cinema chain said, “We are planning to run older Pakistani films once again. We already do that on a smaller scale when attendance is low, especially during Ramazan. But this time around, it’s going to be on a bigger scale. We are going to start in October, regardless of the ban.”

In the past years, the Pakistani government has many times banned anti-Pakistan Indian movies due to their controversial content, these films are; Phantom, Agent Vinod, Sarabjit, Baby, Lahore, Haider, Neerja, Dishoom, Tere Bin Laden and many more.