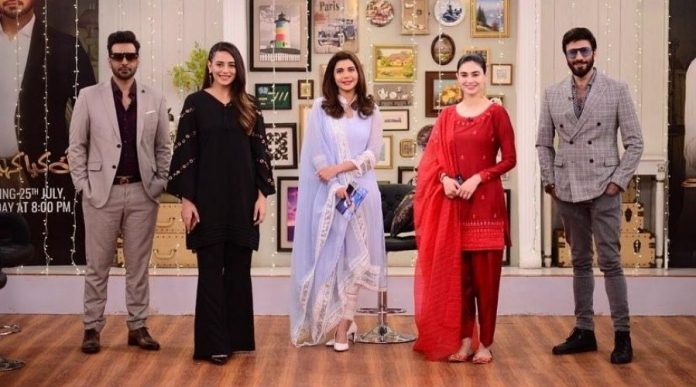 The drama serial, ‘Log Kia Kahenge’ is to release soon on ARY Digital and has already became the word of mouth in the town since the famous Pakistani drama star-studded cast is going to reunite, the duo of Faysal Qureshi and Aijaz Aslam.

Not just that, we will also be seeing a powerful supporting cast of ‘Saheefa Jabbar Khattak’ and the all new actress ‘Kinza Razzak’.

Moreover, The drama is Directed by ‘Mohsin Mirza’, produced by ‘Abdullah Seja’ and written by ‘Soofia Khurram’.

The star cast were recently seen on the sets of popular morning show “Good Morning Pakistan”, hosted by the one and only ‘Nida Yasir’ for the promotion of their upcoming drama serial.

Aijaz Aslam said during the interview that:

“The strong story, cast, production and direction has made this project one of the most enlightened experience for me, and I have been really excited about this project.”

He also shared that,

” I had great fun, working with Faysal Qureshi once again after such gap and I really enjoyed playing the role of Haseeb. I hope that the audience will also love the hard work we had done.”

Even the new star actress ‘Kinza Razzak’ gave her remarks, saying that she is super excited about her upcoming drama serial, although I am new in this industry but I am trying to polish my acting skills so that one day I can say that i am a good actress.”

The drama serial will be airing on ARY Digital on 25th July at 8:00 pm.