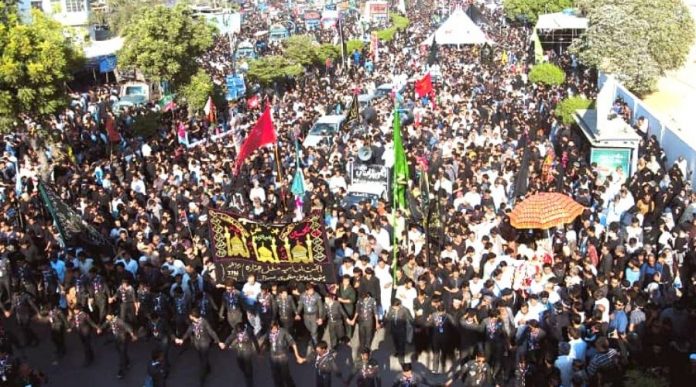 As Muharram processions get started, like every year the government also has started planning out precautions for safety and security of the public.

Here are some of the safety measures the government has announced for smooth Muharram processions.

To maintain law and order in the province the Punjab government has imposed a ban on pillion riding for 9th and 10th Muharram across the province.

The ban has been imposed under Section 144 of Criminal Procedure Code. The ban shall not be applicable to women, children, senior citizens, journalists, personnel of law enforcement agencies and security agencies in uniform.

An order issued by Deputy Commissioner Mohammad Hamza Shafqaat said: “There are sufficient grounds for proceedings under section 144 of the Code of Criminal Procedure (CrPC) 1898, to prohibit the use of motorcycles for pillion riding to avoid any threats to public peace and tranquility within the jurisdiction of Islamabad.

“The deputy commissioner, do hereby prohibit the use of motorcycles for pillion riding in the capital for a period of three days, Muharram 8 to 10,” the order stated.

The Sindh government on Wednesday imposed a ban on pillion riding on Muharram 9 and 10 to maintain law and order in the province.

Ban has been imposed under Section 144 of Criminal Procedure Code, according to a notification issued by the provincial home department.

“The ban shall not be applicable to women, children below the age of 12 years, senior citizens, journalists, personnel of law enforcement agencies and security agencies in uniform and employees of the essential services,” read the statement.

The ban, however, will not be applicable to women, children under the age of 12, senior citizens, journalists, law enforcement personnel in uniform as well as employees of essential services.

Punjab has decided that it is going to ban cellular services in six cities during the month of Muharram.

“The PTA said they are facing problems as duration and timing weren’t mentioned,” according to a letter written to the Punjab home secretary.

“It is requested that duration /timing for jamming of mobile services in the above cities during Muharram 2020 may kindly be conveyed to PTA directly for timely action under Intimation to this Ministry please,” the letter reads.

It has been decided that mobile signals will be off from 8am to 5pm.