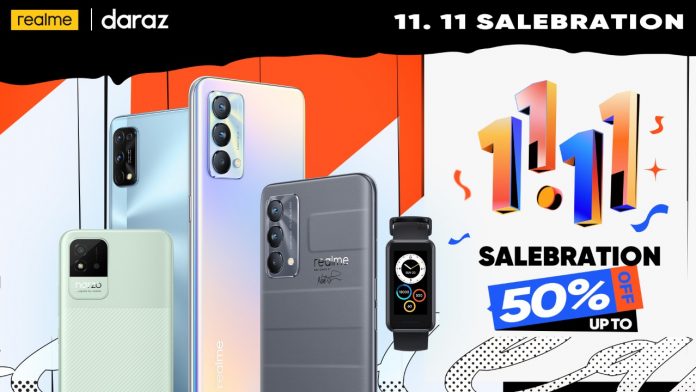 The smartphone created quite a lot of ripples when it was launched globally, and since then the anticipation was palpable. The build-up surrounding realme GT Master Edition’s launch lived-up to all the hype – now that the launch has coincided with a humungous 11.11 Salebration by realme exclusively on Daraz. 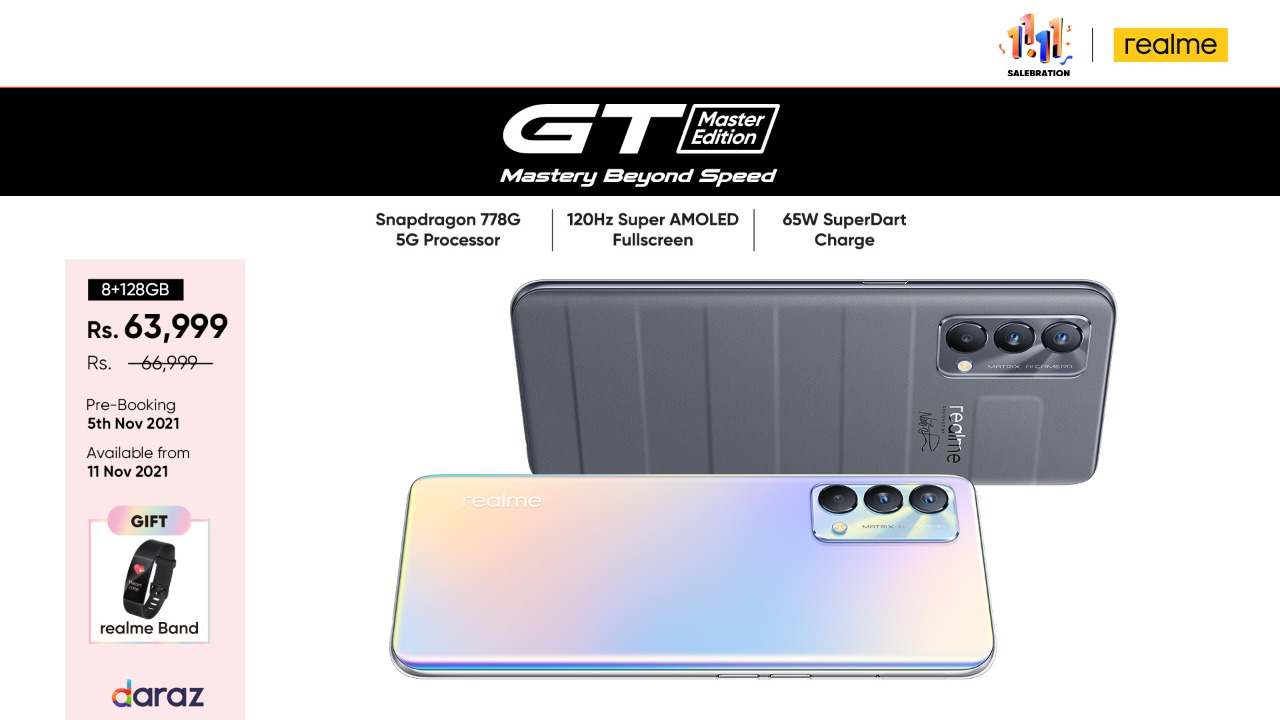 While your heart will be hooked on the game, the display will keep your eyes glued too. The realme GT Master Edition comes with a vivid, smooth and madly captivating 120Hz Super AMOLED Display. It is bound to encapsulate your wildest imaginations with its luxurious, crisp and ultra-smooth feel, whether you’re gaming or watching your favourite content on the phone.

A 65W SuperDart Charge that Pumps the 4,300mAh Massive Battery Back to Power in No-time

The smartphone won’t tire, thanks to its 4,300mAh Massive Battery – and even if the charge starts to diminish, a 65W SuperDart Charge is awaiting to keep the experience going. Get it back to 100% within 33 minutes so there is more time to enjoy and stay glued to your favourite game, movie, social network or just plain content binging.

What happens when a design master does his mastery for a Master phone? A ground-breaking design that truly turns heads and eyes with its minimalistic, yet sturdy look. Winner of the iF Design Award 2021, the realme GT Master Edition is a complete slayer with its design – crafted by the renowned Naoto Fukasawa. Inspired from a travel suitcase, the design beckons the travel bug in all of us.

While the other features on the realme GT Master Edition promise an experience like no other, the camera seals the deal with its story telling prowess. With the 64MP Street Photography camera, these anecdotes will come to life. And, the 32MP Selfie Camera has all the gimmicks to make you come to life too. 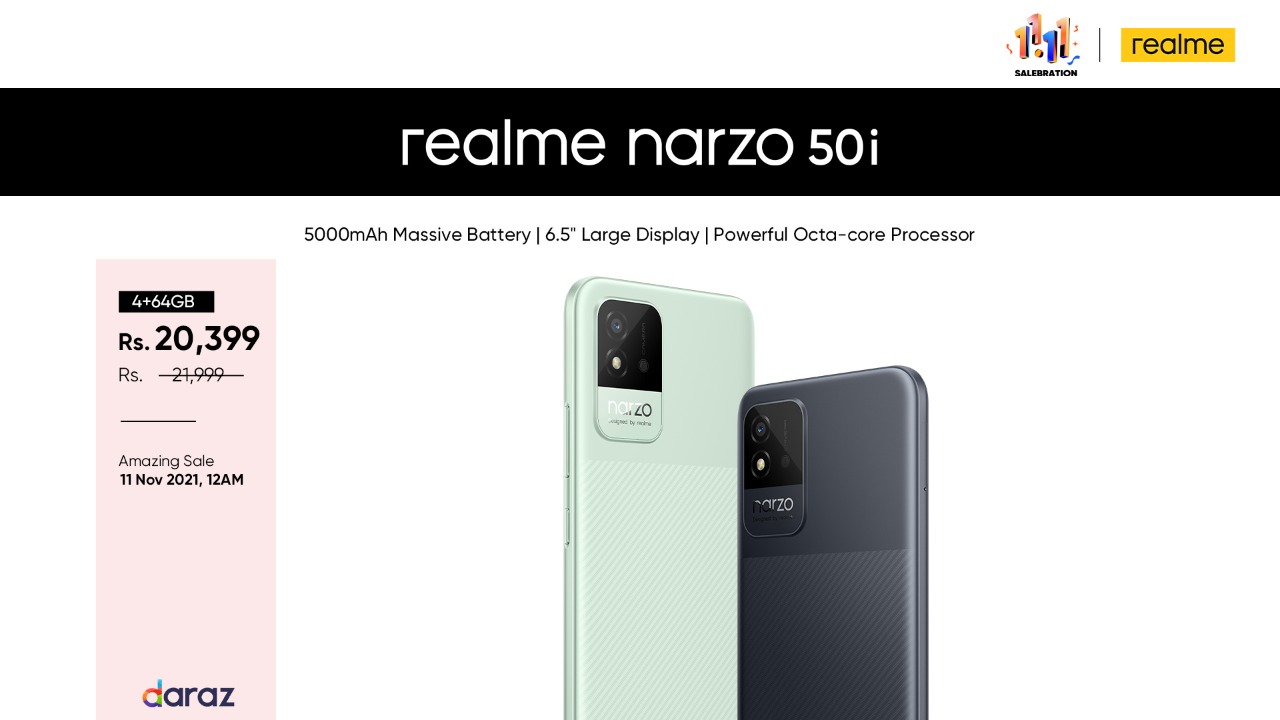 realme is a gift that keeps on giving – just like Christmas so out came realme Narzo 50i. A budget smartphone built for gaming and speed, realme Narzo 50i enhanced durability in a slim and trendy design. Here are a few features of the realme Narzo 50i that will surely resonate with the entry-level gaming market.

The realme Narzo 50i is powered by a 5000 mAH battery for extended usage and reliability. The phone has an enviable standby time of up to 43 days. To enhance its reliability, the battery has an ultra-Saving mode that can offer up to 2 Hours of calling time in just 5% of battery time.

The phone is turbocharged for swift processing by its powerful 1.6 GHz Octa Core processor which is a unique offering in this price range. The phone offers up to 4GB RAM and 64GB ROM for worry-free usage. It runs a realme UI Go Edition powered by Android 11.

A Vivid Display for Quality Viewing

Media viewing and gaming is a rewarding experience on realme Narzo 50i due to the phone’s ultra-vivid and 6.5” large display. The phone’s has a LCD Multitouch display with 1600-by-720-pixel Resolution and its screen to body display stands at 88.5 percent.

Photo capturing is yet another rewarding experience with realme Narzo 50i’s powerful AI 8MP rear and 5MP front cameras. The camera has all the necessary features to transform your beautiful moments to perfect memories.

The phone combines the innovation, reliability and design excellence under its hood in a very competitive pricing. The phone, besides delivering exceptional user experience to its buyers, will go on to bring the lower income groups in the fold of digital inclusion. 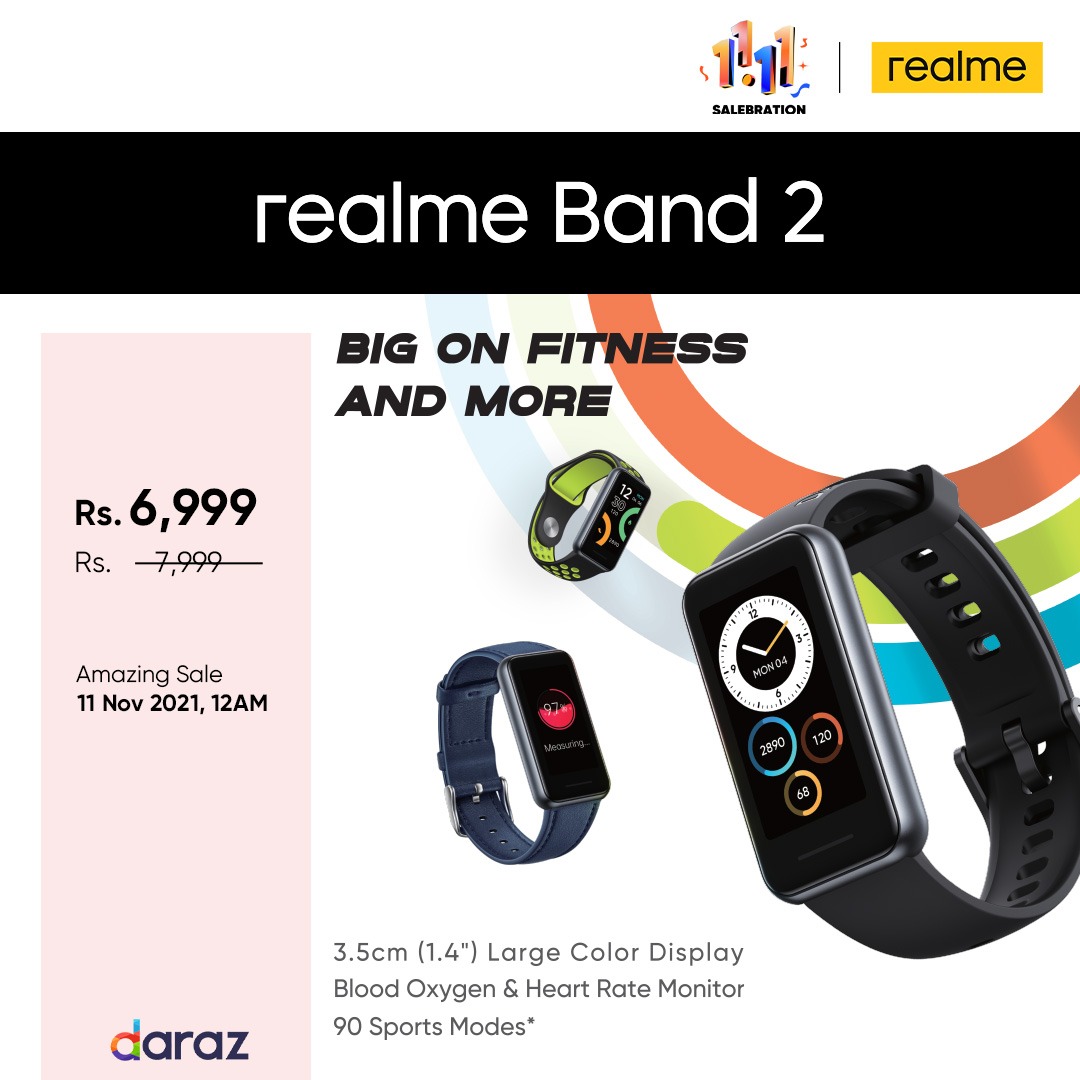 There is something in store for all the fitness lovers too. For PKR 7,999/- that drops to PKR 6,999/- during the 11.11 Salebration on Daraz, realme Band 2 is the fitness companion that’s got you covered. With a 3.5cm (1.4-inch) Large Color Display, the realme Band 2 now monitors Blood Oxygen and Heart Rate. So, while you indulge in one of the 90 Sports Modes, the band keeps your workouts worry free with a 12-day Battery Life and water resistance of up to 50m. 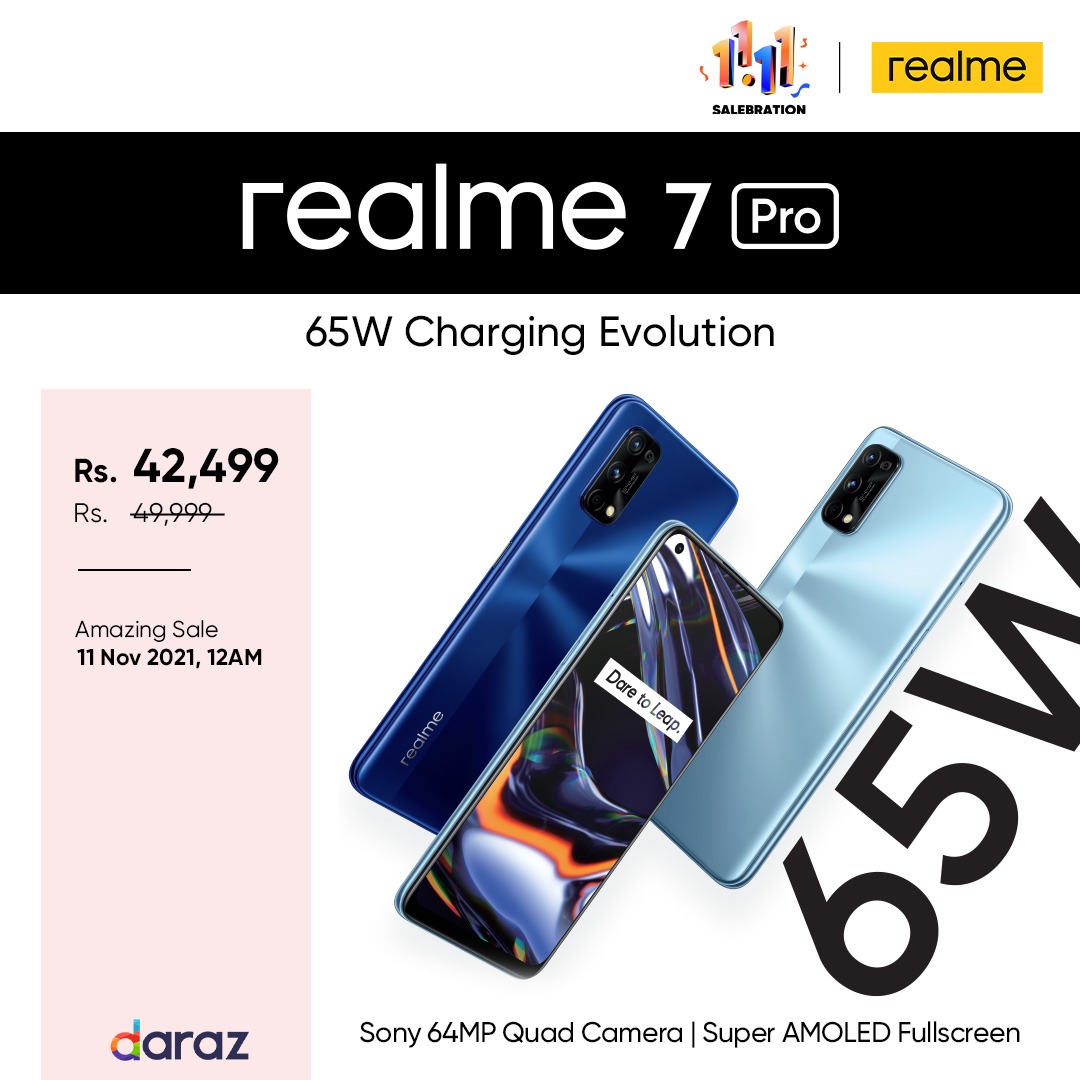 The realme 11.11 Salebration on Daraz will also bring realme’s star power, the realme 7 Pro on an exciting discount. Costing PKR 42,999/-, down from PKR 49,999/-, the realme 7 Pro has won hearts and captivated minds with its 65W SuperDart Charge, Super AMOLED Fullscreen Display, a Qualcomm Snapdragon 720G8nm Gaming Processor and a Sony 64MP Quad Camera.