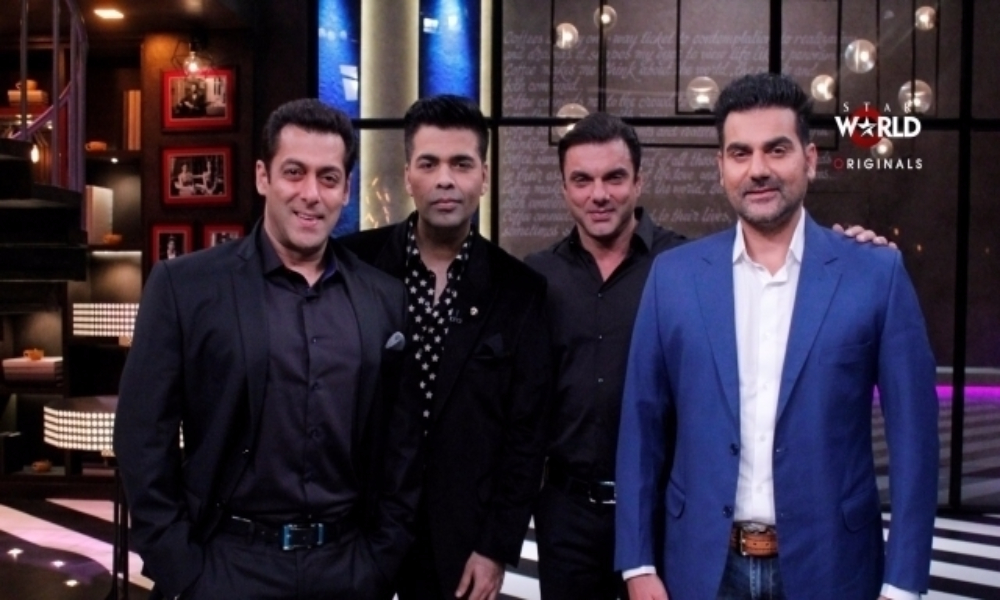 Salman, Arbaaz and Sohail Khan shared Karan’s Koffee platform on the screen when they came in for the 100th episode.

However, it was perhaps one of the biggest episodes of all the seasons combined till date, and if you thought it takes some efforts to get the Khan brothers together in the same frame, well host Karan Johar managed to do that. Nobody could take their eyes off when Salman condescended all the entwined revelations about his personal life and his family life.

Here are some clips from the episode if you have not seen it yet!

Sohail pointed both of his brothers and complimented 1-0-0 in a very deceptive way. Only himself and Arbaaz knows what he meant.

All of them passed the Bollywood Quiz round. Therefore, they had an amazing chemistry between them. They were up for every answer as well pulled eachothers’ legs when one answered something oblivious.

Sohail Khan was able to tell the story of his marriage Seema. They abducted a maulvi who said, “Runaway marriages run in your family.” After all, he was the same man who got their parents wedded in the same manner, and he was abducted 35 years back too by their father!

All three brothers kindly accepted that they still share each other’s underwears/boxers. Sohail is the biggest culprit as of their words. It’s fun to live in one house and enjoy like bachelors still right?

Karan welcomed them very nicely when they came to Karan’s second home. But, however, Salman turned out to be very down to earth as he said he is not the nicest guy when it comes to relationships. Because when there is Karan, it’s necessary to know everybody’s relationships’ first!

When Salman came in the last season and made a startling statement that he was still a virgin, it literally shook the industry. Karan Johar and Salman’s fans might have given him three years until the latest season. But Salman is still a virgin!