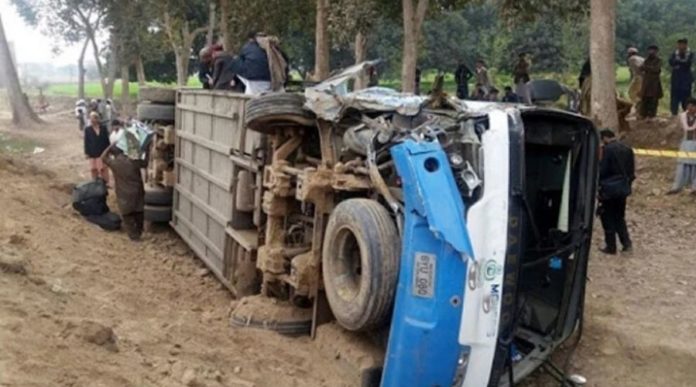 Seven passengers were killed and thirty others injured when a Multan-bound bus over turned on National High way near Khanewal. The rescue teams rushed to the spot and rescued the injured after a two hours long operation.

Rescue sources said the injured have been shifted to District Headquarters Hospital Khanewal where six passengers are in critical condition. According to media reports, the incident occurred new Rango Bridge on Khanewal National Highway when the bus carrying more than 42 passengers flipped in an attempt to save a motorcyclist.

According to Khadian police officials, a motorcyclist Muhammad Siddique was riding on Khadian road when a speeding car coming from the opposite side hit the two-wheeler near Kacha Pakka stop.

The injured have been shifted to District Hospital and Nishter Hospital Multan where six passengers, including three girls was said to be in critical condition. However, a 6-month-old baby miraculously survived without receiving any injuries.

With reports saying people are injured and in a critical condition, the death toll is predicted to rise. A similar accident had happened on Saturday where two people were killed on the road in Kasur.

Though since the lockdown, the latest data has shown that road accidents have reduced overall. Data showed that in Punjab, a total of 1,056 people were killed in 2019 in road accidents in first four months while during the same period of the year 2020 the number reduced to 894.