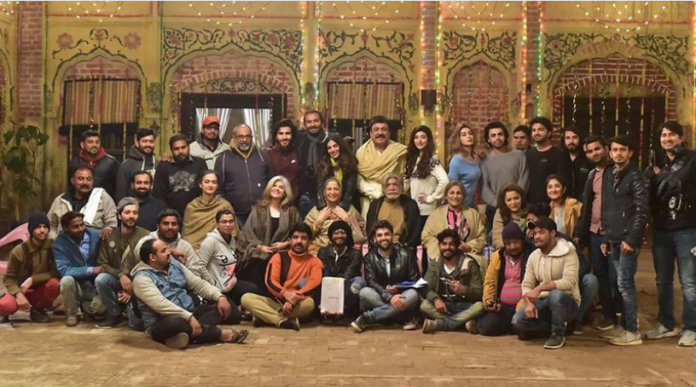 Superstar Urwa Hoance’s debut production project, “Tich Button” which has created quite the buzz and hype among the audiences has finally wrapped up shooting.

Tich Button is an upcoming Pakistani romantic comedy film, starring Iman Ali, Farhan Saeed, Sonya Hussyn, and Feroze Khan, and is directed by Qasim Ali Mureed in his directorial debut.
The trailer for the movie was released a couple of months ago.

The ultra-sizzling duo of Farhan and Urwa joined hands with ARY at the start of this year to make this film happen. Their production house Shooting Stars studios is all set to make its mark in the film industry in collaboration with ARY Films and Salman Iqbal Films.

“Ever since I worked in Na Maloom Afraad, I have remained interested in what goes on the other side of the camera,” Urwa Hocane says in an exclusive conversation.

“I feel a strong passion for storytelling and always wanted to diversify. As far as production is concerned, working with Fizza and Nabeel and later on with Nadeem Baig was like working in different film schools. I learnt so much from them and so it just felt like a natural progression. In fact, my next goal is to direct, fingers crossed,” she adds.

The film was scheduled to be released on the occasion of Eid al-Fitr in 2020, but was postponed due to the COVID-19 pandemic.