A new video has gone viral on social media where multiple men and women are seen assaulting two young women while destroying their house. The alleged assaulters are realtor tycoon Malik Riaz’s daughters along with their gunmen and the assaulted is the actress Uzma Khan and her sister.

The story of the assault goes like this, Amna Usman along with the daughters (Amber Malik & Pashmina Malik) of Malik Riaz, had broken into actress Uzma Khan’s house for questioning the nature of relationship of her relationship with her husband.

Now there are two very clear side of the story, first let’s see what we have so far from the perspective of Amna Khan.

Looking like a clear antagonist in the viral video is Amna Khan who bashes Uzma Khan for her behavior by abusing her and trashing her house. And now when people have come after her for her barbaric behavior, she has released a statement in this video, documenting and clarifying her side.

“I would also like to clarify that my husband Usman Malik has nothing to do with Malik Riaz Hussain, he is not a part of his immediate family. Barrister Hassaan Niazi has a personal grudge with Malik Riaz and he is using this incident to malign him,” she said, alleging that Niazi had also attempted to “settle the matter” in return for money.

Amna further said that the allegation that she had barged into Uzma Khan’s house was wrong because the house was owned by her husband, Usman Malik. “I’ve repeatedly warned Uzma not to wreck my 13-year-old marriage but she continued seeing my husband,” she added.

She also claimed that when she entered the house she saw “cocaine lines and liquor on the table”. “The allegation that I had thrown kerosene oil on Uzma is baseless because it was liquor that I had found in the room,” she said, adding that her actions were justified because no woman could see her marriage being destroyed.

Amna Usman accepts that her husband has been doing wrong by having an affair with the model and that she will look into that matter. The real estate behemoth, Malik Riaz himself took to twitter to clarify his position and deny any association with the whole mess.

He said: “I categorically rebut this malicious propaganda associating me with a viral video. Usman is not my nephew. I’m appalled at such below the belt attempt to malign me for something I’m not involved in any capacity. I would also like to inform that I’ll be filing defamation cases against anyone who tries to implicate me wrongfully for such disgraceful incidents.”

I categorically rebut this malicious propaganda associating me with a viral video.Usman is not my nephew.I'm appalled at such below the belt attempt to malign me for something I'm not involved in any capacity. (1/2)

I would also like to inform that I'll be filing defamation cases against anyone who tries to implicate me wrongfully for such disgraceful incidents. (2/2)

And now let’s look at the other side of the coin that is the story of actress Uzma Khan:
Uzma Khan on Thursday has now filed a complaint after some women allegedly broke into her house with gunmen, whom she claims were the daughters of business tycoon Malik Riaz. 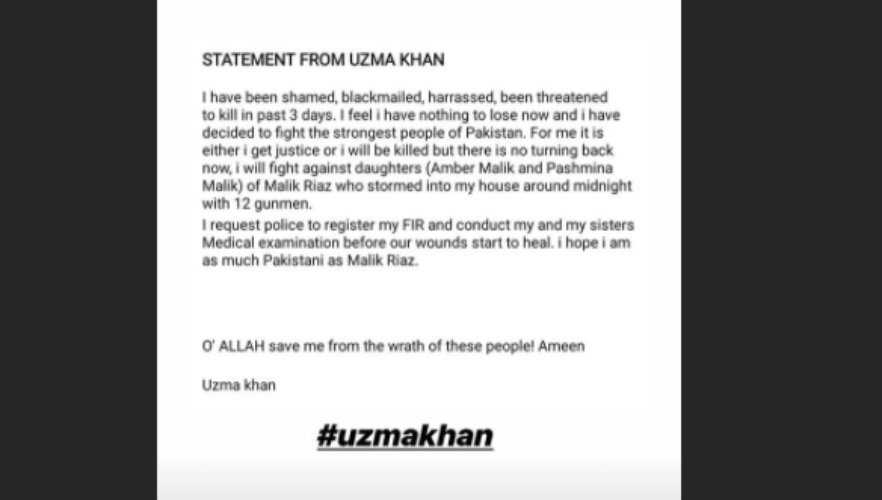 “I have been shamed, harassed, been threatened to kill in the past 3 days. I feel like I have nothing to lose now and I have decided to fight the strongest people of Pakistan,” she said in a statement. “For me it is either I get justice or I get killed but there will be no turning back now.”

“I will fight against daughters… of Malik Riaz who stormed into my house around midnight with 12 gunmen. I request the police to register my FIR and conduct me and my sister’s medical examination before our wounds start to heal. I hope I am as much Pakistani as Malik Riaz.”

After requesting an emergency medical examination of herself and her sister, Uzma Khan also posted her police complaint number on her official social media handle. Lahore’s Capital City Police Officer Zulfiqar Hameed confirmed receiving a complaint from the actor, following which an FIR was registered later in the night.

This FIR that has been registered is completely bogus. Unacceptable. Clearly shows there was immense pressure of Malik Riaz on Punjab Police. This lollipop was given due to public pressure. The fight for justice continues and NO COMPROMISE will take place inshallah #UzmaKhan pic.twitter.com/G4hsVcIqDZ

Meanwhile Replying to Malik Riaz, Hassaan Niazi, Uzma Khan’s legal counsel in the case, said, “As usual and like all other matters, you are again lying. Your daughters led the criminal act accompanied with at least a dozen of paid goons. And cut this threatening tone, don’t threat the people of Pakistan with your money and connections. No one is above the law.”

I have officially engaged my legal counsel, who will fight my case and help me through with this legal battle! Please get in touch with @khadijasid751 @HniaziISF for any queries that you may have. pic.twitter.com/I8SIrZGiZj

Hassaan Niazi also criticized the Police for not taking the action necessary in a case such as this but hopes for the best.

This is such a weak FIR, doesn’t in any way explain the gravity of what happened, its a cover up. The real story clipped, important sections omitted. The system yet again failed to deliver, it was and is a case of the hapless people of Pakistan vs the untouchables. (1/2) pic.twitter.com/WYXnqLxdHd

Many people have come out in support of Uzma Khan as blaming her for the whole incident and dealing with her in such barbaric way is appalling to many. Uzma Khan made her acting debut with the film Waar released in 2013. Later, she also starred with Humayun Saeed in the super hit film Jawani Phir Nahin Aani, and Jawani Phir Nahin Aani 2.