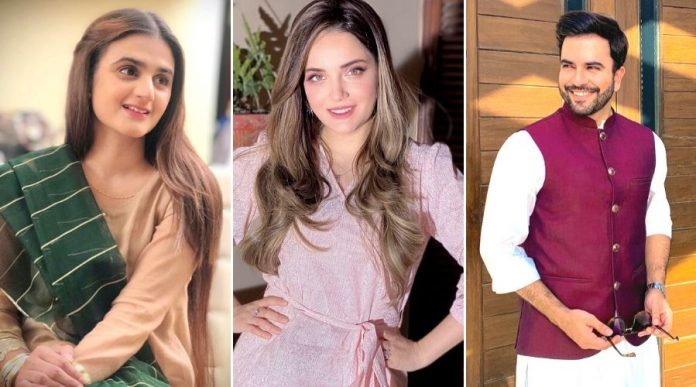 Armeena Khan, the Canadian Pakistani actress, who made millions her fans in Pakistan, is finally coming back to Television screens with her latest project after taking a long hiatus from the industry.

The actress shared a BTS of the unnamed project alongside co-stars, Hira Mani and Junaid Khan.

Not much details are known about this project but the audience are already hyping up the drama as they will love to see their favorite actress returning to the screen.

This drama would mark yet another pairing for the super hit on screen couple, Hira Mani and Junaid Khan, who are making strides with their electric chemistry in the drama “Kashf” at the moment.

The actress recently revealed that her long break from the screen was not without a reason as Armeena said that she did not receive any good script and the only ones that came her way were the old, stereotypical and regressive stories, which she did not want to do anymore.

When one of her fans her asked why she was not coming back to the screen, the actor said that acting is passion for her and no work being offered right now ignites her passion.

“I used to get angry at the kind of projects that were coming my way. Why would you work for something that is killing your passion?”

Armeena Rana Khan made a huge name for herself in the drama industry with projects like Bin Roye, Yalghaar, Janaan and many more.

She has received a Lux Style Award, a Hum Award and a Nigar Award nomination in her short tenure in the industry.