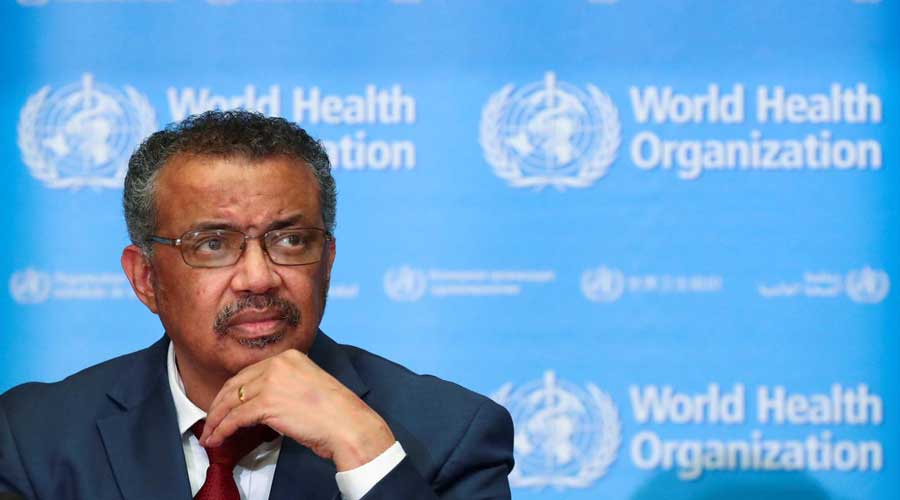 The head of the World Health Organization (WHO), Tedros Adhanom, has warned that the number of people infected with the coronavirus in Pakistan could reach more than 200,000 by mid-July if effective intervention is not taken against the virus.

Tedros Adhanom said it was linked to the United Nations, Pakistan’s National Action Plan, and the WHO’s Global Strategic Preparation and Response Plan.

“When this year began, little was known about #COVID19. Now, it has spread globally, upending health systems and economies, and putting lives and livelihoods at risk”-@DrTedros at the Launch of #Pakistan National Strategic Preparedness and Response Plan virtual conference pic.twitter.com/XKLUEifu5H

The WHO chief said the virus had spread to 115 districts in Pakistan and Sindh and Punjab were among the most affected provinces. He said that the already stressful medical department was facing additional pressure and the worries of the affected people were increasing. He added that the impact of the virus on the socio-economic sector needs to be eliminated.

“The virus has already spread throughout 🇵🇰. 115+ districts are affected, largely in Punjab & Sindh.
The #COVID19 outbreak is creating significant additional pressure on an already overburdened health system, exacerbating the vulnerabilities of affected populations”-@DrTedros

He said little was known about the virus earlier this year, but now it has spread globally, putting lives at risk, including the medical system and the economy. Tedros Adhanom said that in the face of the rapidly spreading epidemic, Pakistan needs more than ever, flexible and timely financial assistance to contain the epidemic. The plan reflects the government’s entire strategic resources, he said. “I would like to make a few requests to other local and international partners, including the United Nations, that the virus is a real threat to Pakistan and that mitigation of this threat depends on a coherent and solid approach,” he said.

“With the fast-moving spread of the pandemic, #Pakistan requires, now more than ever, flexible and timely funding so that it can be allocated quickly to where it is most needed”-@DrTedros #COVID19

“Not only do we need to make this project a reality, but we also need to coordinate to increase resources so that they can be used in a timely manner wherever needed,” he said. Finally, he wished the Muslims of Pakistan well on the arrival of Ramadan.

How Much Long We Will Remain in This Condition:

The head of the WHO warned that the virus will remain for a long time. Tedros Adhanom also warned of an increase in virus cases in Africa, Eastern Europe, Central America, and South America.

He said that by ending or easing the lockdown, the virus would re-emerge. Asked about his resignation, the WHO chief said he would work day and night to save lives and that the WHO was taking effective measures to deal with the epidemic.

The head of the WHO has said that if effective intervention against the virus is not carried out, the number of people infected with the coronavirus in Pakistan could reach more than 200,000 by mid-July. WHO Director-General Tedros Adhanom tweeted that an effective strategy is urgently needed.

“Given the economic situation created by the virus, its effects on the economy will be devastating,” he said. Tedros explained that the number of people living below the poverty line could double.

The WHO Director-General emphasized the need for solidarity, coordination, and effective strategies in the fight against the virus.

“Without effective interventions there could be an estimated 200K+ cases by mid-July. The impacts on the economy could be devastating, doubling the number of people living in poverty.
We must act in solidarity, with a coherent, coordinated approach”-@DrTedros #COVID19

The WHO clarified that 595 million dollars would be needed for an effective strategy. He added that the plan includes strengthening vulnerable links, assisting disease research laboratories, improving case management, and making infection prevention and control issues more effective.

US Funding To WHO

On the other hand, US Secretary of State Mike Pompeo has warned that Washington will never restore WHO funding. Mike Pompeo had said that the World Health Organization needed a major overhaul after dealing with the coronavirus epidemic. The WHO’s biggest donor is the United States, which will never restore UN funding. “We need to take a hard look at the WHO,” he told Fox News.

Earlier, WHO chief Tedros Adhanom Ghibrisis insisted that the WHO did not withhold any information from the United States about any information it had about the global coronavirus. He said the presence of US government work at the World Health Organization in Geneva meant that nothing was hidden from the United States from day one. It should be noted that US President Donald Trump had accused the WHO of failing to deal with the coronavirus and announced the withholding of the fund, on which health experts have strongly criticized this decision.

China and Russia have condemned US President Donald Trump’s decision to cut off funding to the WHO as a blow to global efforts against the coronavirus.