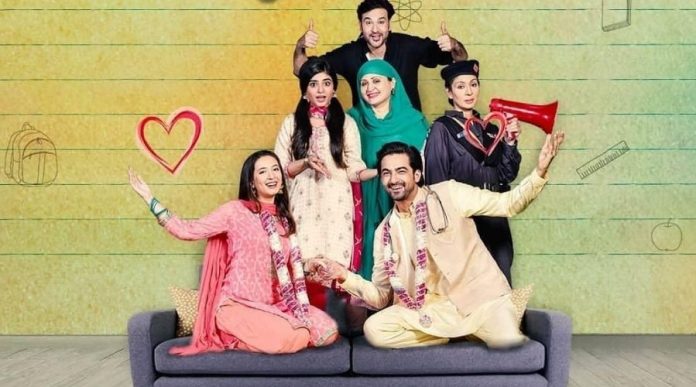 This Eid-ul-Adha as the lockdown continues, people prepare for the festivities at home, and Pakistani Channels seeing to the increasing demand for entertainment is bringing an array of Telefilms this Eid.

Hum TV has employed a number of artists for bringing out entertaining Telefilms for Eid-ul-Adha and of them is the family comedy “Dr.Balma” starring funny man Ali Safina. Hum TV shared the teaser poster of the telefilm on their official Instagram:

From the teaser poster, the telefilm looks like a fun family comedy, which is a love story between the lead characters Ali Safeena and Komal Aziz Khan.

The telefilm also stars Asma Abbas, Saima Qureshi and more in supporting cast. The director and producer of the telefilm have not been revealed yet as the telefilm is promoted as “coming soon” by HUM TV.

Ali Safeena was last seen in the mega hit Eid special show, “Suno Chanda” as Jawad aka Joji and won many hearts with his performance.

Komal Aziz Khan who always plays sweet and innocent characters, is earning rave reviews for her performance as “Saiba” in the hit serial “Raaz-e-Ulfat”.

Apart from Dr.Balma, HUM Tv is airing many more telefilms which include the Ushna Shah and Mikaal Zulfiqar starrer “Lucky Kabootar”, the telefim is set to lift moods with its colorful premise. The BTS of the much awaited Telefilm were released on HUM TV’s official social media account.