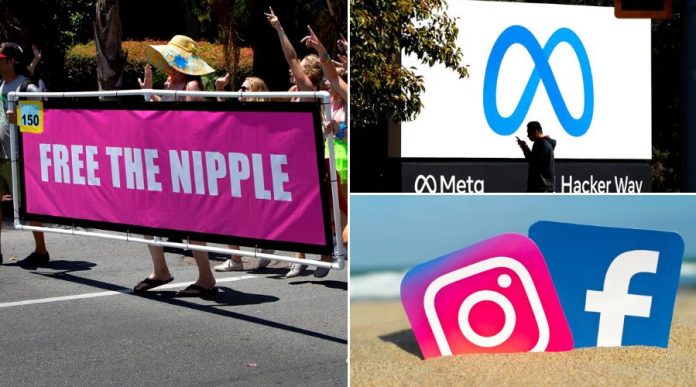 Almost a decade ago, Facebook banned its users from sharing bare breasts pictures on their accounts. However, in a shocking development, Facebook and Instagram parent company ‘META’ have now decided to lift this ban and allow men, women and even trans to share their bare breasts photos on their social media platforms.

According to reports, the decision was made by the Meta Board after Instagram censored two posts from an account that was managed by a trans and non-binary couple. In the post, the couple was posed topless with their nipples covered, and in the caption, they mentioned trans healthcare and raising money for a top surgery.

Many users found it inappropriate and reported it, after which an automated system of the social media giant took the posts down. However, Meta welcomed the board’s move and had already lifted the ban on the pictures, and also agreed that the posts should not have been taken down in the first place. The board also advised Meta to change its adult nudity and sexual activity community standard so that it is governed by clear criteria that respect international human rights standards, reported The Guardian.

According to the board’s report: ”Such an approach makes it unclear how the rules apply to intersex, non-binary and transgender people, and requires reviewers to make rapid and subjective assessments of sex and gender, which is not practical when moderating content at scale” ”The Board finds that Meta’s policies on adult nudity result in greater barriers to expression for women, trans, and gender non-binary people. For example, they have a severe impact in contexts where women traditionally go bare-chested and people who identify as LGBTQI+ can be disproportionately affected.” The report further added.

Reportedly, Meta has been given 60 days to review the board’s advice and make a public response.

How to use Google Maps Without Internet in Pakistan?