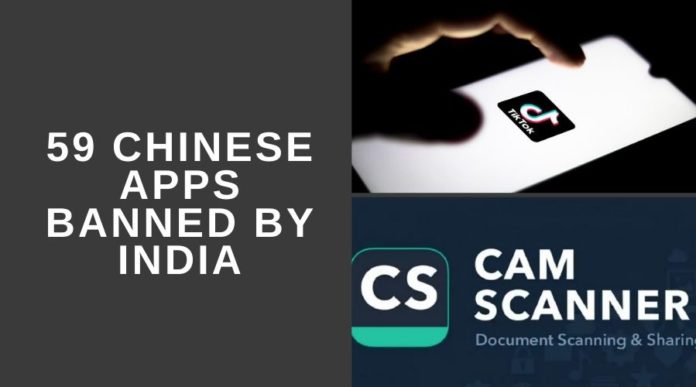 India’s government banned nearly 59 Chinese mobile apps on Monday, which comes after the clash of both the armies at Ladakh border earlier this month, leaving 20 Indian soldiers dead and an unknown number of Chinese casualties.

The reason for the ban of these apps has said to be over national security concerns, “national security and defence of India, which ultimately impinges upon the sovereignty and integrity of India” said the official statement.

“The compilation of these data, its mining and profiling by elements hostile to national security and defence of India,” it said.

The ban has been enforced under Section 69A of the Information Technology Act, 2000 (“Power to issue directions for blocking for public access of any information through any computer resource”): “Where the Central Government or any of its officers specially authorised by it… is satisfied that it is necessary or expedient so to do, in the interest of sovereignty and integrity of India, defence of India, security of the State, friendly relations with foreign States or public order or for preventing incitement to the commission of any cognizable offence relating to above, it may… by order, direct any agency of the Government or intermediary to block for access by the public or cause to be blocked for access by the public any information generated, transmitted, received, stored or hosted in any computer resource.”

Among the apps that India’s Ministry of Electronics and IT has ordered to ban include ByteDance’s TikTok, which counts India as its biggest overseas market; Community and Video Call apps from Xiaomi, which is the top smartphone vendor in India; two of Alibaba Group’s apps (UC Browser and UC News); Shareit; CM Browser, Club Factory, which claims to be India’s third-largest e-commerce firm; and ES File Explorer.

27 of these 59 apps were among the top 1,000 Android apps in India last month, according to the mobile insights firm.

New Delhi said it had received “many complaints from various sources, including several reports about misuse of some mobile apps available on Android and iOS platforms for stealing and surreptitiously transmitting users’ data in an unauthorised manner to servers which have locations outside India.”

Though TikTok, who has the India as its major user chunk said: “continued to comply with data privacy and security requirements under Indian law” and had not shared any information of users in India with “any foreign government, including the Chinese government”.

Cybersecurity analysts have warned in the past about the risks Chinese apps and telecom companies may pose, citing the country’s National Intelligence Law. The law holds Chinese companies legally responsible for providing access, cooperation or support for Chinese intelligence gathering.

“Chinese mobile app firms and other tech firms are beholden to the CCP under Chinese law,” Brahma Chellaney, a former adviser to India’s National Security Council, tweeted on Monday, referring to the country’s ruling Communist Party. “As extensions of the Chinese state, they pose a national security risk.”

The Indian Cyber Crime Coordination Centre, part of the Ministry of Home Affairs, has sent an “exhaustive recommendation for blocking the malicious apps,” the press release said.

Operators of app stores, like Apple and Google will likely be forced to help India enforce ban on these apps on their phones.