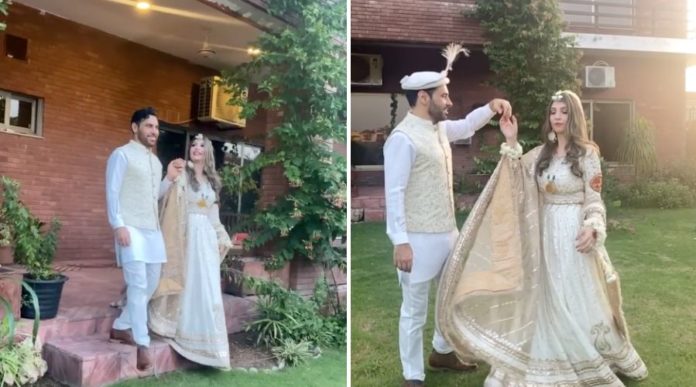 Pakistani singer and industry veteran, Haroon Rashid has officially tied the knot. The blessed event took place yesterday with only close friends in an intimate Nikkah ceremony, according to the sources.

The beautiful couple wore coordinated cream and gold coloured outfits. The bride looked ethereal in a cream lehenga choli with colourful yet minimal beadwork whereas Haroon complimented his bride perfectly with a cream Shalwar Kameez, style with a waistcoat.

Farwa Hussain AKA Mrs. Haroon, is from Islamabad and how the two met and ultimately married are details not yet revealed to the public.

It is evident that the ceremony was kept under wraps as Haroon has always been a private person and also because the Covid-19 spread has limited people to having smaller ceremonies rather than big events.

The singer has not yet shared the news on his social media. In the 90s he formed the band Awaz with a couple of musician friends, Faakhir and Assad Ahmed.

Haroon has sold millions of singles and albums worldwide and has performed at large venues such as the Wembley Arena. His song “Jaanemann”, went down in history as the first ever Urdu and Pakistani song to air on the MTV Asia.

He is also the creator and director of the 3D animated children’s television series Burka Avenger which received critical acclaim.