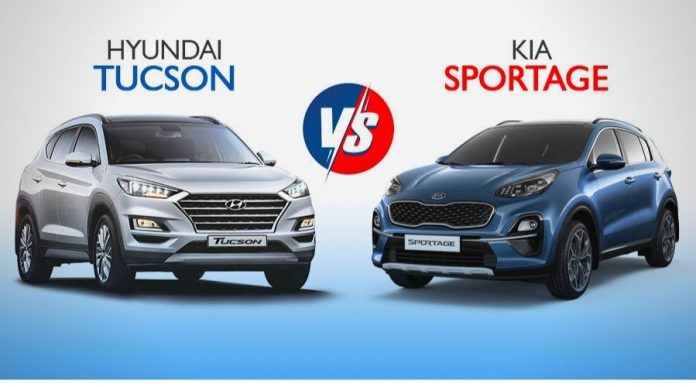 Released within a year apart, the Kia Sportage and the Hyundai Tucson are the most recent additions in Pakistan’s market of crossover SUVs.  The Kia Sportage was released a year back, with reasonable number of modern features and decently low price, has become one of the most blazing new vehicle in Pakistani vehicle market.

From that point forward, everybody had been hanging tight in expectation for the launch of the Hyundai Tucson, which was initially booked for June of 2020 however was deferred by a month because of the COVID-19 crisis. At last, the dispatch of the vehicle occurred few days back in a live Facebook video stream, in which all the features and the cost of the SUV were revealed.

Since Kia is owned by Hyundai, both vehicles share a ton of likenesses with each other. Both are Korean, both have been successful in the vehicles market worldwide and both offer pretty much similar features and comforts and both have nearly similar price. Given those realities, the opposition between the two is probably going to be unimaginably intense. In any case, there sure are various things, aside from the conspicuous visual traits, that can assist you with differentiating the two vehicles from each other and help you settle on the choice to purchase that is best for you.

Before we start going into detail, know that Hyundai Tucson will be launched in 2 variants, i.e. the front wheel drive (FWD) GLS Sport variant and the all-wheel drive (AWD) Ultimate variant. Whereas, the Sportage is offered in 3 variants i.e. the FWD Alpha and FWD mid-range variants as well as a range-topping AWD variant. More details will be covered regarding these variants further on.

Here’s Pakistani Journal’s face off between the Kia Sportage and the Hyundai Tucson head-to-head:

As far as their design, Kia has adopted a lot bolder strategy for every one of their vehicles; however the Sportage looks especially polarizing. With its striking design, incredibly high up placed aggressive headlights with quad-cube DRLs, huge tiger-nose grille patented by Kia and a front bumper with a sporty look and an enormous grille at the base with two vents surrounding the fog-lights Kia Sportage is a master class in terms of design. 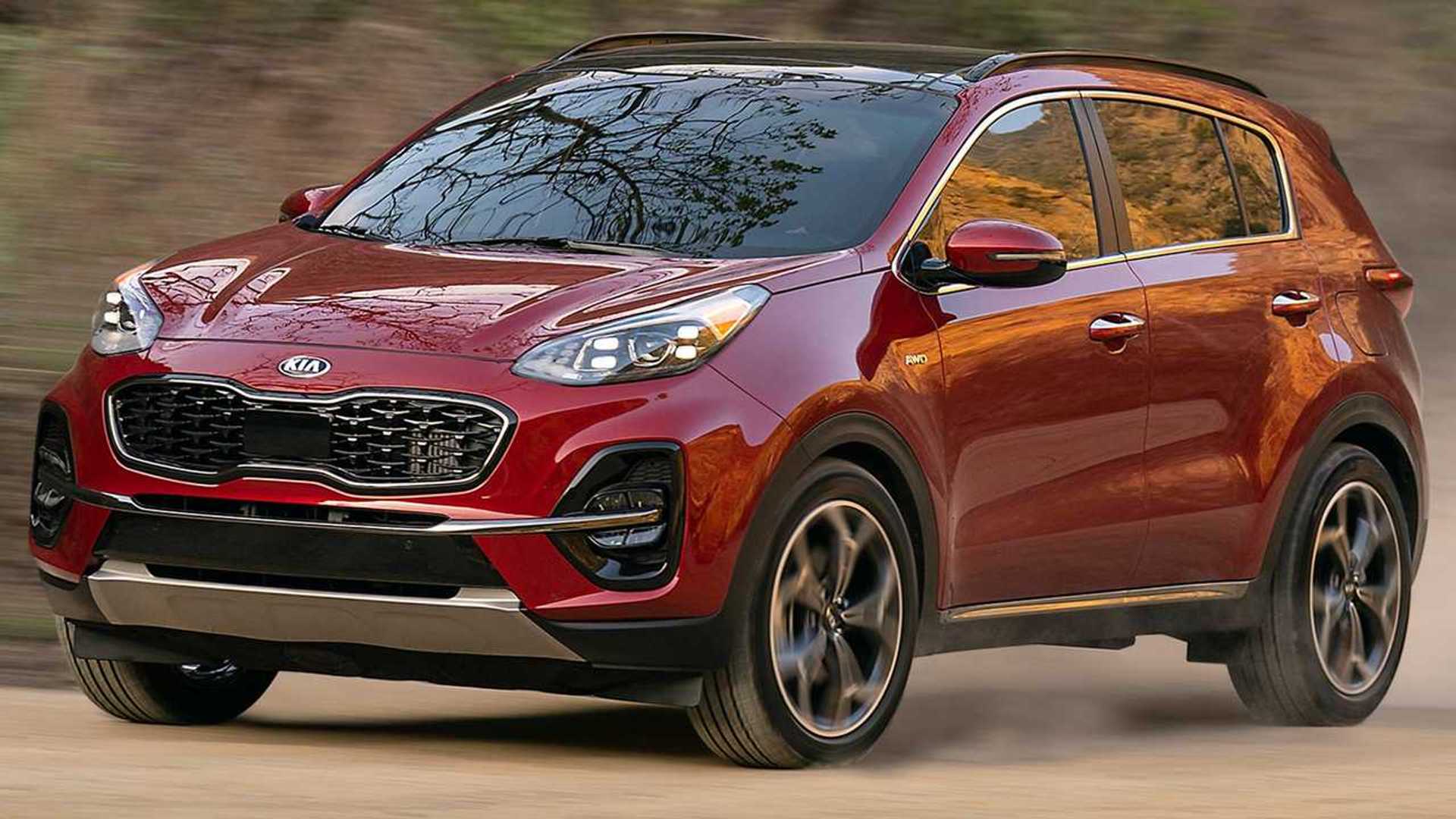 If you look towards its sides, huge 18 inch alloy wheels will be spotted, however the Alpha accompanies 17 inch alloy wheels. Along with the wheels you will also find a whole mess of lines and creases by Kia to give Sportage a sporty look. To give it an adventurous look as well you will find sport silver roof rails on the side of the panoramic sunroof on the top of the vehicle.

The sporty look also proceeds on the back, with the power tailgate featuring a spoiler and a flat light strip that runs along the whole width of the vehicle and mixes in with the sharp LED taillights.

Additionally on the back, you will spot indicator lights and reverse lights mounted on the bottom, and most importantly, the dual exhausts that are surrounded by a trim piece that is made to look like a skid-plate/rear diffuser.

On the other hand Hyundai Tucson’s design is not excessively showy. It features Hyundai’s trademark large and imposing hexagonal front grille, angular oval-ish headlights and taillights, smooth flowing lines and a round silhouette, makes a fairly simple, yet a gorgeous vehicle. In front of the vehicle, you will spot penta-LED Headlamps with DRLs, a skid-plate that makes the car look tough and off-road-ready, and a couple of fog lights.

If you look towards its sides, you will find built-in turn signals side mirrors operated via power and puddle lamps. Silver rooftop rails are here too and door-handles with chrome gives Tucson an adventurous touch to the side profile of a very sophisticated SUV. Just like Kia Sportage, Tucson also features side-garnish to give it a characteristic of a rough and tumble, off-roader. You will locate extended oval-ish taillights a trademark of Hyundai’s design if you move around the back. Moreover, you will find a couple of back reflectors at the base, twin-exhaust tip, and a shark- fin antenna at the back for style and better radio sign gathering.

Both vehicles for all intents and purposes share the equivalent features, the two vehicles also share virtually the same measurements. Whereas, because of slight differences in design the measurements are slightly different form one another, below are the dimensions of Kia Sportage and Hyundai Tucson:

As the vehicles are tremendously different outwardly, they are also unfathomably unique form within too. In any case, for this situation, Kia is the one that clearly goes the traditional route.

Featuring generally a very conventional layout in its interior Kia Sportage has an 8 inch infotainment screen (7 inch in Alpha) in the center and a basic, straight dash design. 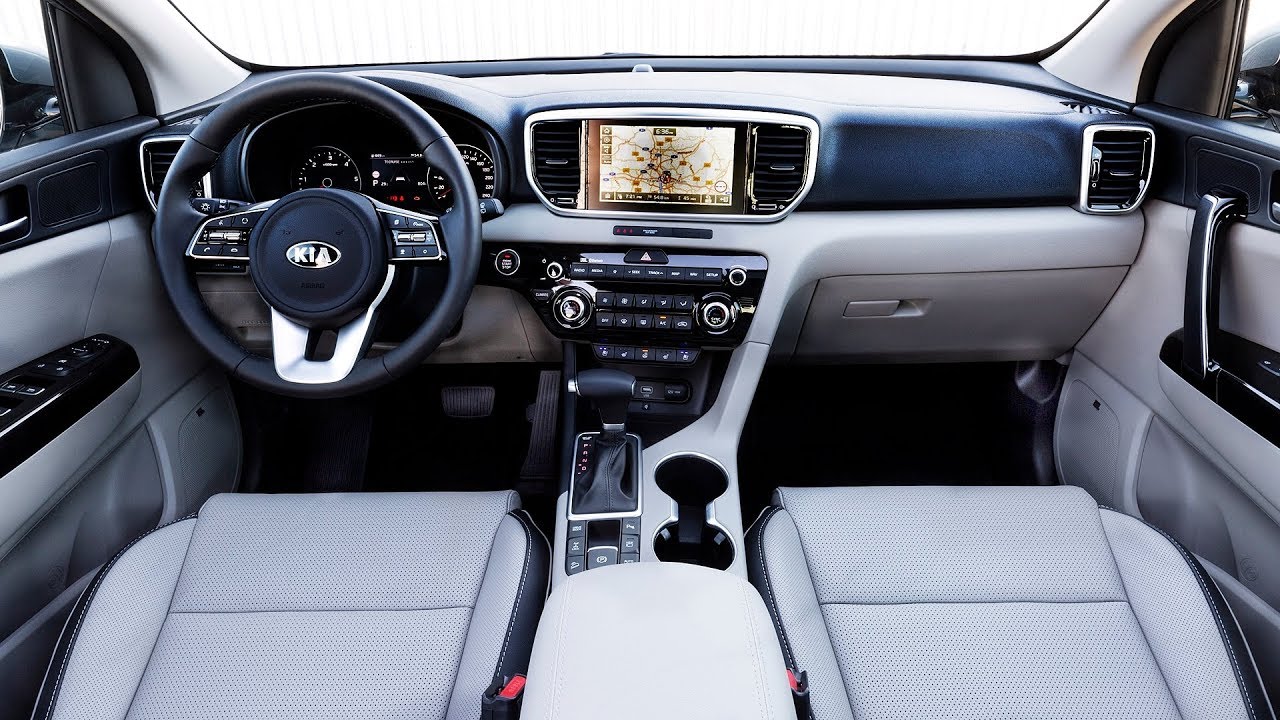 In spite of the fact that the quality and tech are certainly sufficient, with the vehicle featuring a dashboard that is produced using delicate material, and instrument panel with a digital screen for additional info, rich leather seats (fabric ones in Alpha) a large and comfortable cabin space, and a panoramic sunroof (Plain rooftop in Alpha) that lights up the cabin considerably further. The cream-hued trim mixed with earthy colored additionally looks satisfying. 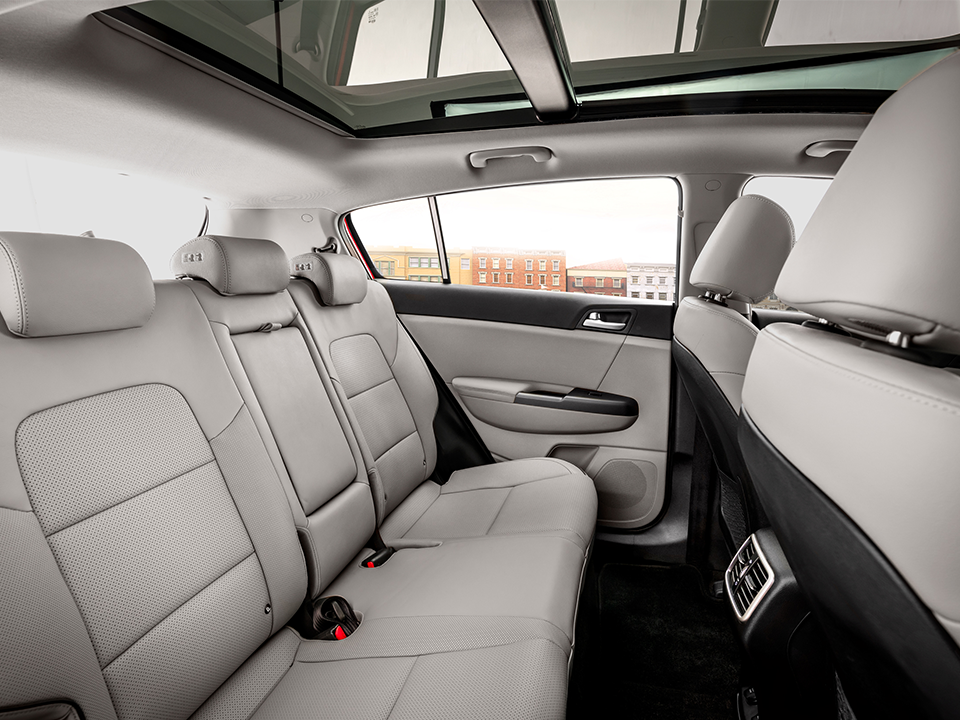 In any case, Hyundai has opted a route which is very contemporary as far as their interior design is concerned. With more modern cockpit and a bit more angular design of dash which in comparison of Kia Sportage is curvy and complex.

Hyundai Tucson also comes fully loaded, such as a 10 inch larger infotainment screen, delicate material made dashboard, and instrument panel with a digital screen for additional info, plush leather seats (fabric ones in GLS Sport) a roomy and comfortable cabin space, and a panoramic sunroof for more brightness. Despite the fact that the all-dark inside makes the cabin looks excessively dim. As it was referenced before, both the Kia Sportage and the Hyundai Tucson for all intents and purposes are similar to one another underneath. This implies that the both vehicles share a ton of segments with each other. The two SUVs have the equivalent 2.0 Liter 4-chamber MPI petroleum engine that makes 155 pull, around 196 newton/meters of torque, and come standard with a 6-speed automatic transmission.

The two vehicles feature two drive trains; one that includes an electronic central diff-lock and powers every one of the 4 wheels, sending the vast majority of the power to the front wheels other one that powers the front wheels only.

T he Kia Sportage and the Hyundai Tucson also feature a similar suspension arrangement, McPherson McPherson struts upfront and a multi-link coil spring suspension in the back. Despite the fact that the Sportage is somewhat heavier with a curb weight of around 1,500 KG while the Tucson is marginally lighter with a curb weight of around 1,450 KG, which may bring about a bit unique ride.

The two vehicles are likewise also alike kitted out as far as specs and highlights too, aside from Kia Sportage’s Alpha trim which misses a couple of key features. Following are the features that you can get in the two vehicles:

The prices of both, the Sportage and the Tucson were identical, until a fews days back, when Hyundai has quite recently announced a Rs. 200,000 price bump in both of its Tucson variants. Therefore, Kia edges out Hyundai by a decent margin, as its mid and top variant costs less than those of the Tucson, as well as due to the fact that their base variant i.e. the Sportage Alpha is much cheaper as compared to the mid-range and range-topping variants. Following are the prices that the Tucson and the Sportage can be had for:

Kia and Hyundai both automakers have the strongest point that they offer the leading warranty among the automotive market of Pakistan. They both offer a 4 year/100,000 kilometre warranty for all their cars. The standard practice by the prior automakers in Pakistani market is that they offer 3 year/60,000 kilometres warranty, which gives the newcomers an edge over the current rivalry.

At long last, having taking everything into account, in spite of the fact that the Tucson is apparently a new comer, all the more energizing item, the Sportage is a little bit less expensive than the Tucson, which, given the way that the two vehicles are about indistinguishable regarding features and specs, makes the Sportage a marginally better incentive for money.

In addition, Hyundai has recently increased the price inside 2 days of its dispatch; eager customers will undoubtedly reconsider before setting Hyundai as their favored decision. In any case, with Hyundai having lifted the cost of their crossover SUV, there is an undeniable possibility of Kia settling on a similar choice very soon.

Nevertheless, granted that the Tucson is slightly more expensive, than the Sportage, both cars have a lot of the modern conveniences that the other cars in Pakistan at the same price point don’t have. So ultimately, it comes down to one’s own taste in vehicles. The Sportage has a quirky yet likable personality with its innovative design whereas the Tucson is for the more subtle and restrained folks who like to appear neat, elegant and well-put-together. Nevertheless, both cars are worthy contenders and a fine addition to the otherwise monotonous automotive market.