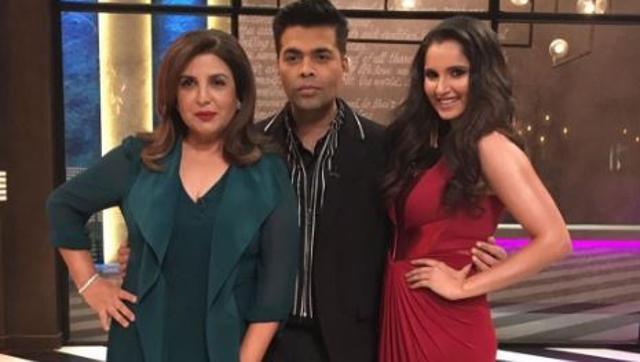 Koffee with Karan, one of the most-talked TV show where celebrities bring masala, humour, entertainment and a bundle of secrets with them. Acclaimed filmmaker Farah Khan along with the Tennis Star Sania Mirza will also be seen on the sets of Koffee  with Karan Season 5. Excited much?

The seasons 5 of Koffee with Karan started on 6th November and we can’t stop talking about this famous celebrity show where the first guests on the set were none other than KJo’s best buddy our very own SRK along with her co-star from Dear Zindagi Alia Bhatt.

Farah and Sania are both known to be blunt and spontaneous in their responses. With both of them coming on a show together, it will surely be an awesome episode where both the stars will entertain us by replying to Karan’s complicated questions and especially the dangerous rapid fire round.

As for Sania, this will be her very first appearance on the sets of Koffee with Karan and what could be great than having your best friend together on the very same episode. Farah Khan who had appeared earlier on the show knows the tips and tricks while for Sania it will be all new. Earlier the best-friend duo appeared together on The Kapil Sharma Show where they left the audience filled with laughter with their great sense of humour.

Let’s hope the duo takes the episode to another level of awesome-ness!