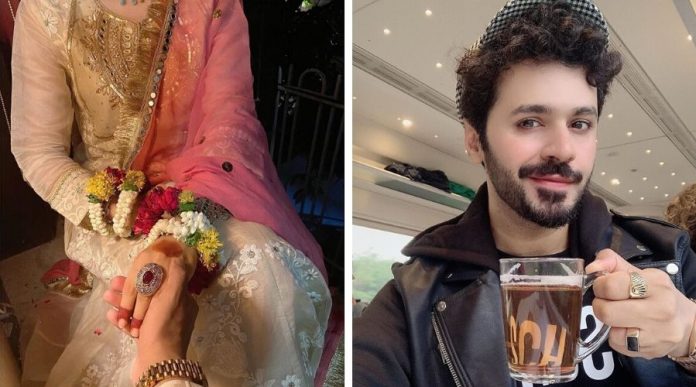 One of the rising stars in the Pakistani Entertainment Industry, Saim Ali, has just tied the knot and his fan base is super excited for the star as he begins a new chapter in his life.
The young star announced the happy news via his Instagram account, saying: “Challo ao ek naye zindagi shoro kare” Allhumdulilah Ma sha allah got Nikkaofied #gotmarried ❤️ #feelingblessed”

Though the identity of the bride has been kept a secret for now, but Saim has been responding to the queries of whoever is asking if his wife is from showbiz or not, like the comment below:

Many celebrities like Amina Ilyas, Noor Abbas, Sadaf Kanwal and many more commented on the actors post to give him the heartiest congratulations on his Nikkah.

Saim Ali, a Lahore-based actor, who entered showbiz almost a decade ago. Saim started his career as a fashion designer since he grew influenced from his mother Farah Gillani, a famed designer herself. “I got my formal training in fashion designing from Dubai. I was doing pretty well but then after a few years, I decided to follow my passion, i.e. acting. I was in the designing field only because of my mother who wanted me to follow suit. Now, I am a full-time actor,” explains Saim.

He started his career in acting with the drama serial ‘Heerí’ for Geo TV in 2015. He also hosted a morning show for a private channel with actress Noor, the same year. He gives credit to Shaista Lodhi for introducing him to TV.