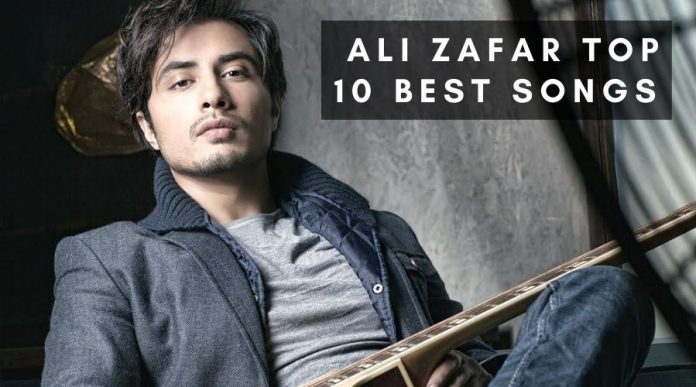 If there is anyone who can be quoted as the “King of Pop”, has to be hands down the superstar and singer, Ali Zafar.

Ali Zafar is a Pakistani singer-songwriter, model, actor, producer, screenwriter and painter, who has managed to bring fresh content in the music and entertainment industry for over a decade now.

Ali Zafar is counted amongst the music legends of the country and has received many accolades from audiences and critics alike. He has received five Lux Style Awards and a Filmfare Award nomination.

After performing for millions around the world in live concerts, Zafar was voted as the “Sexiest Asian Man on the Planet”, based on a worldwide poll by the British newspaper Eastern Eye.

So here is a list of the ten best songs by Ali Zafar that are not to be missed.

One of the most pleasing songs visually and to listen to, Sun Re Sajaniya, is a combination of hip and romance. It is a song about a Casanova tasting the bitterness of his own medicine.

Featuring Sunita Marshall, Channo is a back and forth between a lover’s pursuits to getting the attention of the one he loves. Fun filled video and upbeat nature of this song makes it worth listening to again and again.

Considered to be the best song that has captured the Pakistani cricket fans, Ab Khel Jamay Ga is undoubtedly the true anthem of Pakistan Super League.

One of the earlier hits that made Ali Zafar the greatest pop star the country has seen, Chal Dil Mere scores a 10 when it comes to the sound, lyrics in combination with the melodious voice of Ali Zafar.

Marking his acting debut in Bollywood, “Mere Brother Ki Dulhan”, starring Imran Khan and Katrina Kaif was a fun filled ride which got massively elevated with songs sung by Ali Zafar. “Madhubala” is the classic Ali Zafar Bollywood song that has become a cult classic.

A take-off from his original upbeat style, “hoom” features a Sufi style in the music and style with which Ali Zafar has performed it, making it a definite must listen.

“Mela Loot Liya” was a different experience from all other Ali Zafar songs as it embroiled in controversy and featured real videos of fans that submitted their own dance moves. The song was received positively and became PSL anthem amidst corona pandemic.

Yet another early hits of the rockstar, Ali Zafar performed the song with high energy and vigor making it a quintessential pop song.